Transdisciplinary Sociologist to Report the Quantum Enigma Unriddled in 2020

"Albert Einstein, who disliked quantum theory and found it incomplete, himself caused its enigma imaginally, but his relativity theory helps unriddle it beautifully," reveals a new forthcoming book by the sociologist of knowledge Mohammad H. Tamdgidi 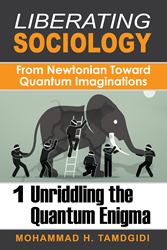 The basic lesson here is that without a self-reflective, transdisciplinary, and transcultural approach, human problems will never be adequately solved. Consciousness inescapably matters—not in a spooky, but in a reasonable, way. The ‘theory of everything’ will never result from just pure physics.

In a forthcoming major new study in the sociology of scientific knowledge, social theorist Mohammad H. Tamdgidi will report having unriddled a century-old puzzle in science, the so-called quantum enigma. His book will offer a relativistic solution in a transdisciplinary and transcultural sociology of self-knowledge framework.

Tamdgidi’s book, Liberating Sociology: From Newtonian Toward Quantum Imaginations: Volume 1: Unriddling the Quantum Enigma, to be released on January 20, 2020, opens the lid of the Schrödinger’s cat box of the quantum enigma after decades, finding something both odd and familiar: Not only the cat is both alive and dead, it has morphed into an elephant in the room in whose interpretation Einstein, Bohr, Bohm, and others were each both right and wrong because the enigma has acquired both localized and spread-out features whose unriddling requires both physics and sociology amid both transdisciplinary and transcultural contexts.

According to the author, “the famous light-chasing thought experiment Albert Einstein self-reportedly made when young in 1895 and again in 1905, inspiring his theorizations of relativity, contained an historical asynchronicity that has not been noticed before and points to how the quantum enigma was seeded.”

“The problem,” Tamdgidi argues, “is that the 1905 Einstein writing his first miracle-year paper on light, where his notion of its wave-particle duality was reported, never asked whether the light he was imaginally chasing in 1905 or even back in 1895 was a particle or a wave. Instead, he referred to light as a beam at the time and also in his retrospective reporting of his 1895 youthful thought experiment, even though in 1895 light was still undisputedly considered to be a wave and not a particle moving as a beam.”

“Had he written his third 1905 miracle-year paper on relativity first,” the author quips ironically, “Einstein may have found a relativistic solution to his puzzle about light’s duality that seeded the quantum enigma.”

Tamdgidi continues, “the light beam Einstein imagined chasing was actually chasing him as well. In fact the bidirectionally waving beam in his reference frame was also at once a wave spreading out in all directions in its own reference frame.”

In the author’s view, Einstein’s notion of the wave-particle duality of light and its associated “complementarity principle” (later coined by Niels Bohr), and several other resulting notions, are false narratives—astonishing blunders in science in fact—despite the quantum theory being, rightly so, the most tested and confirmed scientific theory. This is because, according to Tamdgidi, the photon is always an electromagnetic wave and the question really is about how the same wave can at once be a localized object flashing by as a beam, and a spread out object moving in all directions like a ripple in the universal pond.

In fact, as odd as it sounds, but not so according to Einstein’s otherwise beautiful theorizations of relativity, Tamdgidi states, we live inside what we consider to be tiny photons flashing by.

According to the author, the quantum enigma is a result of our dualistic, ideologically constructed and habitually leftover (at times hypnotically perpetuated as in our double-slit experiments), classical Newtonian ways of imagining reality.

Tamdgidi concludes, “the reported findings of the book offering a relativistic solution to the quantum enigma may be significant for resolving other puzzles in physics, including its failures so far in unifying relativity and quantum field theory. The basic lesson here is that without a self-reflective, transdisciplinary, and transcultural approach across the natural and social sciences and the humanities, human problems (including those in science) will never be adequately solved. Consciousness inescapably matters—not in a spooky, but in a reasonable, way. The ‘theory of everything’ will never result from just pure physics.”

It can be pre-ordered from major online bookstores worldwide. Educational, library, and volume order discounts are available for upfront (pre-paid) pre-orders placed directly through the Okcir Store. The store offers free domestic US shipping. For international orders and other ordering inquiries please contact orders@okcir.com.

Mohammad H. Tamdgidi (pronounced ‘tamjidi’), Ph.D., has previously authored Advancing Utopistics: The Three Component Parts and Errors of Marxism (Routledge/Paradigm) and Gurdjieff and Hypnosis: A Hermeneutic Study (Palgrave Macmillan). Formerly an associate professor of sociology at UMass Boston specializing in social theory, he is the founding director and editor of OKCIR: Omar Khayyam Center for Integrative Research in Utopia, Mysticism, and Science (Utopystics) (est. 2002, http://www.okcir.com) and its scholarly journal, Human Architecture: Journal of the Sociology of Self-Knowledge (ISSN: 1540-5699). Due to ongoing research commitments facing urgent deadlines, and preferences for written communication and privacy, please reach the author first via email. If needed, phone contact can be also established.