International travel to Peru from the United States is poised to increase in the coming years, according to analysis from SouthAmerica.travel, a South America tour operator based in the United States. 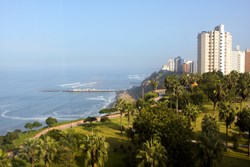 The capital of Peru, Lima, has been developing sustainable projects, mass transit improvements, and biking and walking areas.

Americans in particular are one of the main sources of international tourists to Peru each year. Tourism has been booming at a clip of almost 500,000 American tourists in recent years.

International travel to Peru from the United States is poised to increase in the coming years, according to analysis from SouthAmerica.travel, a South America tour operator based in the United States. Tourism accounted for 3.4% of total GDP in 2012, and the Peruvian government seeks to increase that percentage, in order to safeguard against the more volatile mineral exports that currently make up the bulk of Peru’s GDP.

But Peru was also only the 26th most visited country for Americans traveling abroad in 2012, making it a middling destination often outshined by closer destinations like Canada and Mexico. This is somewhat disappointing, considering that Peru features remarkable biodiversity and cultural diversity, and hosts 11 UNESCO World Heritage Sites.

The Peru tourism board seems to be engaging in an advertising campaign to increase American tourism to Peru. If you’re located in Seattle, for example, you may have noticed the Peru advertisements circumscribed on Metro buses, and it might explain the subliminal itch to travel to Peru that you’ve been feeling. Peru.travel, the sponsor of the ads, is part of the official tourism board of Peru. Representatives of the organization were not available for comment at press time.

It’s no wonder why Seattle is part of the Peru.travel advertising campaign. The city is a major hub for international travel, ranked 16th among departure points for Americans traveling overseas in 2012, with 472,191 people traveling overseas. And now that Alaska Airlines and Delta are vying for market share dominance in SeaTac, it’s fair to say that there’s seldom been a better time for Pacific Northwesterners to hit the skies.

Plus, the active travel industry in the Seattle area indicates that there is a demand in the local marketplace for international travel. Travel industry professionals often gather for AdventureDrinks, an event organized by the Adventure Travel Trade Association, which is based in Seattle. Wide World Books & Maps, and Metsker’s Maps in Pike Place Market cater to travelers. Travel specialists like SouthAmerica.travel, located in Pioneer Square, offer tailor-made tours to Peru.

For Americans, travel to Peru is affordable. USD is nearly a parallel currency in some parts of Latin America. In Peru, the Peruvian sol is currently 2.82 to the Dollar. With a $20 bill, you can dine out at a very nice restaurant, and for $100/night, you can stay in a high-quality 4-star hotel. A 2-week Peru vacation package that includes tours, hotels, transfers, trains, and domestic flights costs $3340.

With the continued development of infrastructure in Peru, that percentage is bound to increase. Formerly one of the most polluted cities, Lima was plagued with 30,000 disorganized public buses. In 2010, Lima unveiled a new transit system, the El Metropolitano, and more mass transit improvements have vastly changed the capital’s appearance. Other social projects, such as a billboard in Lima that produces potable water, promise innovations that will improve quality of life and promote tourism.