Chavira, who wrote over 50 songs with the late music legend, is planning a number of retrospective projects 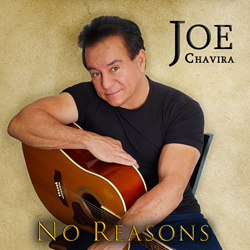 "No Reasons really shows off the diversity of my songwriting better than anything I’ve done before,” says Chavira. “From pop ballads to rockabilly to R&B and country, it shows off the full range of the music that I love."

Acclaimed singer-songwriter and Trini Lopez protégé Joe Chavira has announced the release of his third album, No Reasons. Throughout 13 emotionally gripping original songs, Chavira establishes himself as one of the premier lyrical and melodic composers and performers working today. No Reasons is available to stream and download HERE.

“No Reasons really shows off the diversity of my songwriting better than anything I’ve done before,” says Chavira. “From pop ballads to rockabilly to R&B and country, it shows off the full range of the music that I love. But each song is straight from the heart – I always try to bring honest emotions in anything I write.”

Produced by Doug Tomooka (aka Saiku Sapien), No Reasons features not one, not two, but three shining lead singles: the sleek and sexy power rocker “Tantalize,” the elegant and heart-wrenching solo piano and vocal title track, as well the uproariously funky, horn-driven groover “Say La La.”

“All three songs give you a pretty good picture of where I’m at musically and lyrically,” says Chavira. “With ‘Tantalize,’ I wanted to write a teasing, sensual song that create a visualization of passion in which listeners can establish their own fantasies. For ‘No Reasons,’ I was influenced by the stark beauty of the Eagles’ ‘Desperado,’ but I was also inspired by Bruno Mars’ ‘When I Was Your Man.’ And ‘Say La La’ is custom-made to get the party going. There’s no way you can hear that one and not want to dance.”

The album includes more winners, like the smooth, blue-eyed soul gem “The Coolness of You,” as well as “One Foot In One Foot Out,” a fun and frisky rockabilly rouser that Chavira unapologetically wrote in the style of Queen’s “Crazy Little Thing Called Love.” “A lot of writers don’t reveal their influences, but we should always tip our hats to artists that shaped us,” says Chavira.

He also points to Pharrell Williams as his North Star when writing the frothy pop hookfest “She’s a Picture.” “I love to change masks when I write, and I loved how Pharrell’s song ‘Happy’ just makes people jump and feel good. ‘She’s a Picture’ is about complimenting the woman in your life, girlfriend or wife. It's got nothing to do with what she really looks like; it’s just saying, ‘She's an amazing soul. She is my picture.’”

One of the album’s stunning highlights is “You Keep Me Breathing,” a soaring, richly orchestrated testament to the power of love. “For ‘No Reasons,’ I imagined it as a soundtrack for a motion picture as I walked along the beach,” explains Chavira, “I think cinematically a lot of the time when I write.”

Raised in Santa Maria, CA, Chavira got his musical start early; he learned jazz drumming from his father and moved on to guitar and piano. But while other aspiring singer-songwriters toiled in L.A. clubs, Chavira was spotted by TV producers and was hired to perform at celebrity telethons and broadcast shows. It was at a 2015 event in Palm Springs that Chavira was introduced to one of his earliest musical heroes, Trini Lopez. “Somebody told him that I write music,” Chavira recalls, “and Trini said, ‘Oh, yeah? How many?’ I told him 800, and he looked at me and said, ‘OK, play one.’ Chavira sat down at a piano and played Lopez one of his originals. Without a reaction, Lopez asked for one more. After Chavira played a second song, Lopez said, “How about the two of us make history together?”

Chavira and Lopez bonded quickly both personally and musically. “We had a lot in common – our dads were both from Texas, both kind of old-fashioned,” Chavira says. “Our relationship became sort of a father-and-son thing.” Their songwriting partnership blossomed almost immediately. “Trini had written songs before, but he never had a real collaborator, so he was very excited to work together. He’s known for his brilliant guitar playing, but a lot of times he would play the piano and I would play guitar.”

During the course of their five-year partnership, Chavira and Lopez wrote, performed and recorded over 50 songs together. A number of their songs appeared on Lopez’s latter albums, such as the reflective “Here I Am,” which was released in 2016. “Trini wanted a signature song, like Sinatra’s ‘My Way,” says Chavira. “’Here I Am’ was about Trini’s whole life and career. He was singing about his family, his grandpa Trinidad. When he recorded it, his voice cracked at the end. I asked him if he wanted to redo it, but he said no. He thought it was perfect.”

Chavira performed on stage with Lopez, and the two worked together right up till the singer’s tragic death from COVID-19 complications last August. Chavira was a pallbearer at Lopez’s funeral service in Dallas; after reading a eulogy, he performed one of the songs they wrote together called “Heaven’s Eyes.” “Trini’s whole family was crying after I played it,” he remembers. “His nephew came to me and said, ‘He talked so much about you. He really bragged about working with you, and he loved you like a family member.’”

At present, Chavira is planning to remember his friend, mentor and songwriting partner with a number of upcoming projects. There’s the wealth of songs they wrote together but never released (“I’m trying to figure out the best format for putting them out”), but there will also be a book and a documentary. “There’s so much about Trini’s career that people just don’t know,” he says. “To many people, he’s the guy who sang ‘Lemon Tree,’ or maybe they saw him in The Dirty Dozen. His life and accomplishments need to be told, and I feel very fortunate to be entrusted to preserve his legacy.”