Trivedi Science™’s latest science publication of The Trivedi Effect®’s impact on the herb Withania somnifera (ashwagandha) is now public. The publication shows that the treated plants have higher medicinal capabilities than the control plants, which is invaluable research for the treatment of cancer, neurodegenerative disorders and stress. 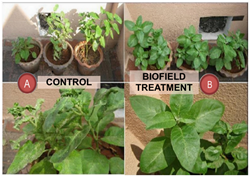 During their complimentary online live broadcast to the public in June 2015, Trivedi Master Wellness™ shared their latest science breakthrough on the impact of consciousness/biofield energy on material phenomena, including the medicinal properties of plants. Mahendra Kumar Trivedi’s first Master Student Gopal Nayak received his second science publication, which was accepted by the U.S. based peer-reviewed science journal called the “Journal of Environment & Health Sciences” by Ommega Publishers. The research paper is titled “Effect of a Biofield Treatment on Plant Growth and Adaptation” and is now accessible to the public. The publication shows that the biofield treatment administered by Gopal Nayak was able to impact the adaptive response of the plant Withania somnifera, otherwise known as ashwagandha, Indian ginseng, poison gooseberry, or winter cherry.

This plant has highly potent medicinal properties that have been used to treat neurodegenerative disorders, cancer and stress. It is an herb that has been used for over 3,000 years in India’s ancient Ayurvedic modality of treatment and has recently gained a lot of hype and popularity in western medicine amongst doctors and health practitioners alike.

Gopal Nayak’s biofield energy transmission was applied to a group of Withania somnifera plants, while another group was left untreated to serve as a control group. The studies were performed both in vivo and in vitro and were assessed in terms of phenotypic and physiological parameters, such as germination, number of shoots per plant, length of the shoots, glutathione levels, quantity of chlorophyll a and b content, anticancer activity in HepG2 cells, DNA polymorphism and secondary metabolites (i.e. withaferin A and withanolide D). The results showed that all of the treated plants in vitro had an earlier germination and matured much more quickly, which is indicative of higher levels of vitality in the plant life. There were very obvious morphological differences in the treated plants versus the control plants, such as thicker and shorter roots and greater quantity, as well as a greater increase in plant immunity and levels of active constituents.

The treated plants’ total chlorophyll levels, including chlorophyll a and b, showed a consistent and significant increase both in vivo and in vitro. In comparison to the control group, concentrations of chlorophyll b increased by 660% in vivo, and total chlorophyll levels increased up to 428% when compared to the control group. The biofield treatment was able to increase the Glutathione (GSH) levels up to 20.9% more than the control group. Results from HPLC testing revealed an increase of Withania somnifera metabolites, including an increase by 48% in withaferin A and a 21% increase in withanolide D. On a final and promising note, extracts taken from the treated plants showed the highest anticancer activity in comparison to the control group, assessed using MTT assay in HepG2 cells. The full publication is available here: http://www.ommegaonline.com//form/issues/effect-of-a-biofield-treatment.php

Based on these results, the treated plants showed enhanced and more potent medicinal properties than the control group, showing that the Biofield Treatment is capable of increasing the medicinal potency, yield and overall efficacy of Withania somnifera, which can be an invaluable source of treatment for neurodegenerative disorders, stress and cancer.

Though these results deem themselves extraordinary, this is not Trivedi Science™’s first groundbreaking research on the impact of Biofield Energy on material phenomena. Mahendra Kumar Trivedi, founder of Trivedi Science™, has been using The Trivedi Effect® (otherwise known as Biofield Treatment) in many different fields of Life Sciences and Materials Sciences, accumulating several thousands of independent scientific studies. These science experiments have lead to a substantial amount of publications in genetics, cancer, microbiology, biotechnology, materials science and agriculture. Gopal Nayak is one of Mahendra Trivedi’s first Master Students who also has the ability to administer Biofield Energy Treatments and replicate The Trivedi Effect®. Mr. Trivedi has created two more Masters since then: Trivedi Masters™ Alice Branton and Dahryn Trivedi. All publications and further details of the science experiments are available at: http://www.trivediscience.com