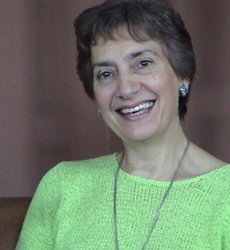 Isabel Aguilar is a philosophy professor, successful consultant, and a gifted natural healer.

The aim of Aguilar’s research was to investigate the impact of Biofield Energy on the test formulation and the cell line media in relation to the function of vital organs such as bones, heart, liver, lungs, and brain using cell-based assays, cystic fibrosis, osteoporosis, etc.

Isabel Aguilar is a philosophy professor, successful consultant, and a gifted natural healer. For more than 30 years of practice and study, she has uniquely integrated traditional and contemporary healing systems with applications which extend far beyond physical, emotional or mental health.

She has taken this paradigm into educational, business, organizational and spiritual development.

Aguilar’s core belief is that health is more than the absence of disease, and that achieving higher levels of consciousness, opens one to the Infinite Source and to greater wellbeing and joy.

Her years of experiences with Guruji Mahendra Trivedi, Founder of Trivedi Global Inc, and the Trivedi Effect®, and being part of his Healers Mastery Program, brought her to another level as a healer, harnessing Life Force Energy from nature and transmitting it remotely to organisms and materials, which is now verified by scientific research.

Isabel focuses her healing and wellbeing approach in personal health and in the systems and resources of business.

About the Trivedi Effect® & Guruji Mahendra Trivedi
The Trivedi Effect® is an evidence-based phenomenon in which an individual can harness inherently intelligent energy from nature and transmit it to living organisms and non-living materials, anywhere in the world through thought intention, to significantly enhance potency and beneficially alter their characteristics and behaviors through transformation at the atomic, molecular, and cellular levels.
Guruji Mahendra Kumar Trivedi, Founder of the Trivedi Effect®, is on a mission to usher in a new era that integrates science, spirituality, and consciousness to vastly improve the human condition and benefit humanity on a global scale. To date, more than 250,000 people worldwide have benefited from the Trivedi Effect®. His organization, Trivedi Global, Inc., is collaborating with globally renowned product research and development organizations to bring to market proprietary products and therapies in the areas of nutraceuticals, pharmaceuticals, and more.
Alice Branton, CEO of Trivedi Global, Inc., has spoken on the impact of the Trivedi Effect® at the Entrepreneurship Club of the Harvard Business School, Nasdaq, Microsoft, and Coca-Cola. She has also appeared on more than 35 network television news shows including ABC, NBC, FOX, CW and more.
Dahryn Trivedi is a prodigious spiritual leader, young entrepreneur and inspiring speaker. Along with Guruji Mahendra Trivedi she devotes her time to expand and promote awareness about the power and potential of the Trivedi Effect®. She has shared her message at NASDAQ and has been featured on ABC, NBC, Fox, CW media in the United States.
Gopal Nayak is one the youngest enlightened spiritual gurus for the new generation in India. He is a pioneer in Biofield Energy Science. Nayak raises awareness about the potential impact of the Trivedi Effect for the beneficial transformation of all living organisms and non-living materials. Nayak is highly sought after by business leaders, politicians and celebrities throughout India and abroad. Nayak has transformed the lives of thousands of individuals from around the world, especially in the USA, Canada and Europe.
The Trivedi Effect® has been tested, measured, and validated in more than 6,000 scientific experiments globally, by world-renowned scientists and research institutes using the rigor of internationally accepted models of scientific research with the most sophisticated technologies available. Challenging the known frontiers of science, this research has resulted in over 500 publications in major international peer-reviewed scientific journals with more than 6,500 citations.
These publications are available in over 2,300 universities internationally including the prestigious Ivy League Universities, as well as the National Institutes of Health (NIH).
Forward-Looking Statements
This press release contains forward-looking statements. Forward-looking statements involve known and unknown risks and uncertainties, which may cause actual results in future periods to differ materially from stated results. Readers are cautioned that forward-looking statements are not guarantees of future performance or events and, accordingly, are cautioned not to put undue reliance on forward-looking statements due to the inherent uncertainty of such statements. Statements in this news release that are not purely historical are forward-looking statements and include any statements regarding beliefs, plans, expectations, and orientations regarding the future. Often, but not always, forward-looking statements can be identified by words such as “may”, “will”, “should”, “would”, “expect”, “intend”, “plan”, “anticipate”, “believe”, “estimate”, “predict”, “potential”, “seem”, “seek”, “future”, “continue”, “appear”, or variations of such words including negative variations thereof, and phrases that refer to certain actions, events or results that may, could, would, might or will occur or be taken or achieved.