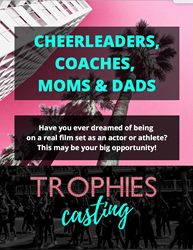 I want Trophies to be authentic and genuine, in part because I want to respect and give back to a sport that gave me so much, but also accuracy is important in story-telling if you want to truly engage an audience. Those who live in this world always know the difference." - Mandy May Cheetham

Writer and director, Mandy May Cheetham, has announced plans to shoot a pilot episode for her dramedy, Trophies, at the end of September in Orange County, California. A nationwide open casting call through social media aims to discover the next big acting talent—with elite athletic cheer-specific skills.

Based in the niche world of competitive all-star cheerleading, Trophies is an unfiltered take on the intense performance sport. A gritty look at the glamorous world, the show explores and examines the complex lives of teenage girls and their mothers, as well as the relationships and families that support these athletes on their journey to elite competitive success. Cheetham is casting as many as 30 female competitive cheerleaders ages 15-23 and also plans to include additional real cheerleaders and cheer parents as extras rather than regular Hollywood actors, showing a dedication to an accurate representation of the sport.

“I remember when I was growing up I would watch anything that had a cheerleader in it, and I could always tell who the actors were and who were the real cheerleaders. I want Trophies to be authentic and genuine, in part because I want to respect and give back to a sport that gave me so much, but also because accuracy is important in story-telling if you want to truly engage an audience. Those who live in this world always know the difference.” —Mandy May Cheetham, creator, writer, director of Trophies.

The production of the casting experience is in partnership with the industry-specific social app CheerLife and Orlando-based Moxie Brands—a boutique strategy agency with a proven record in brand-building within the cheer and female sports space. In using social media to drive the casting, Trophies is engaging the youth demographic on their turf, driving interest and an organic fanbase for the pilot. Successful applicants will get to experience a Hollywood Acting Intensive, giving athletes with an interest in an acting career the opportunity to take classes in acting basics, on-camera techniques, commercial auditioning, and meet agents from Milestone Talent Agency.

In the U.S. alone, competitive all-star cheer has close to 1.5 million participants and over 5000 teams traveling and competing nationwide. Its participants are mostly teenage girls who thrive off social engagement, with some elite athletes having followers in the 100k+ range on various social platforms. They use their popularity to advertise for brands, give advice to aspiring athletes, and curate a personal brand that reflects the many facets of their lives—of which cheer related travel, fashion, and skills videos is often the anchor. Most importantly, they’ve built their influencer empires organically and have the engagement rates to match, meaning the Trophies social media casting initiative is right on the money.

For more information visit Cheerdaily.com/Trophies or the Trophies Channel inside the CheerLife app which can be downloaded at Google Play and the Apple App Store.

About Mandy May Cheetham
Trophies creator, Mandy May Cheetham, is a former all-star cheerleader, international choreographer and coach, and has worked on over 60 projects as an actor, writer, and producer across commercials, TV, film, and stage. Known for her genuine gift for comedy, this pivot to drama will be the first commercial TV series set in the world of competitive cheerleading.