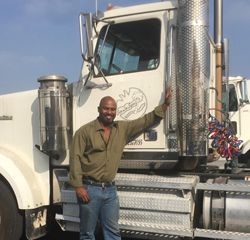 Dillon Bruno, inventor of the ExacTac Picture Hanging Tool, is a truck driver by day and an inventor at night.

The ExacTac Picture Hanging Tool lets you easily put up pictures exactly where you want them!

Dillon Bruno, an enterprising truck driver is also an inventor/entrepreneur and he took his product idea, the ExacTac picture hanging tool to market within a year. With Bruno’s invention, the ExacTac picture hanging tool, a person can effortlessly line up numerous pictures on the wall. Psychologists and counselors have confirmed that hanging up family photos give both children and the elderly, and all family members, a sense of inclusiveness and positive self-esteem when their photos are displayed on the walls.

It all began when Dillon’s sister asked for his assistance when she was redecorating and wanted help hanging several pictures on the wall in a straight line. The process turned into the familiar fiasco including several empty nail holes in the wall and still the pictures were uneven, some higher than desired, others lower than wanted. Dillon decided he wanted a simple solution to this common problem and he started the invention process.

Dillon Bruno researched what products were available at the local hardware stores and online, he then started sketching potential improved gadgets and tools to make picture hanging simple. The issue of getting a picture level with another was one problem Dillon identified; another problem was making the nail stay in place on the wall. Dillon wanted a ruler included, magnetic parts to hold a nail in place and options for one or two hooks or nails per picture. Dillon built a few mock-ups of his invention at home and then contacted T2 Design & Prototype in Santa Monica, California.

Dillon chose T2 Design because they have been in business for over two decades and the company has been involved helping inventors develop hundreds of inventions, including numerous successful ones that have been featured on ABC’s TV series “American Inventor” and recently on the ABC hit TV series “Shark Tank,” starring iconic entrepreneurs Mark Cuban, Lori Greiner (the “Queen of QVC”), Kevin O’Leary (“Mr. Wonderful”), Robert Herjavec, Daymond John and Barbara Corcoran.

Dillon Bruno hired T2 Design to work with him to perfect his ExacTac invention. Several evolutions later and some new prototypes, manufacturing began and Dillon has now launched the ExacTac, available online.

Dillon notes that, “if I can make it easier to hang pictures, especially family photos to go up on the wall and that can raise the self-esteem of just one person, then it is all worth it.”

Bruno is now in discussion with hardware stores about carrying the ExacTac picture hanging hardware, as his Amazon sales grow. Bruno states, “I like tinkering with gadgets. Being an inventor requires long hours, patents and more, and you often need some assistance. Working with Paul and T2 Design was a real help and a positive experience.”

T2 Design works with inventors at any and every point of the invention process, from idea, to design and prototyping to manufacturing. “Consultations are done over the phone or in person,” said president Paul Berman. “Inventors find us from all over the world. It has been terrific to work with Dillon. He is incredibly inventive and was determined to make sure that the ExacTac would be on the market by Christmas this year.”

The ExacTac Picture Hanging Tool lets you easily put up pictures exactly where you want them.

Inventor Dillon Bruno at the office of T2 Design and Prototype.