The U.S. Transportation Department has recommended relaxed hours-of-service requirements for truck drivers. While acknowledging the case for change, Advanced Training System’s John Kearney urges a focus on safety above all else. 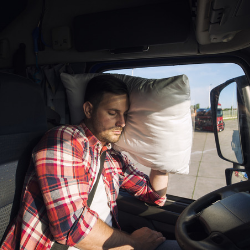 John Kearney, CEO of Advanced Training Systems, underscores the need for simulator training in light of the proposed drive-time regulations.

"Fatigue is a real factor in driving, and while there is no magic way to eliminate it, it is something that simulation training can help drivers recognize and deal with."

In mid-August, the Transportation Department’s Federal Motor Carrier Safety Administration (FMCSA) proposed a set of changes to the hours-of-service rules that govern the hours truckers can spend behind the wheel and the total number of breaks they are required to take[1]. “This proposal addresses some real issues and frustrations confronting truckers and the industry,” says John Kearney, CEO of Advanced Training Systems. Kearney, whose company is a leading designer and manufacturer of virtual simulators for driver training. “However, we must always make safety, both for drivers and other motorists, our number-one concern.”

The proposed new rules include these suggested revisions:
1.    Drivers would be able to take a break while on duty but not driving--i.e. while the truck is stationary and waiting to be loaded or unloaded.
a.    Under current rules, stationary on-duty hours count against the driver’s allowable daily driving time.
2.    Drivers would be permitted to “pause” the 14-hour driving window for an off-duty break of up to three hours.
a.    This would create a possible 17-hour workday, with the provision that the driver still takes 10 consecutive hours off duty at the end of the shift[3].

Many drivers are paid by the mile, which means that excessive wait time at loading docks—known in the trade as “detention time”—costs drivers money. According to a recent FMCSA report, detention time costs the average driver $1,281 to $1,534 per year, or 3-3.6 percent of the driver’s total annual income. The report also estimates that excess detention time raises the likelihood a driver will be involved in a crash by 6.2 percent, due to a consequent urge to make up for lost time[4].

“We can argue about what specific hours-of-service limits should be,” Kearney said. “No one questions that reasonable limits should exist and should be enforced. Fatigue is a real factor in driving, and while there is no magic way to eliminate it, it is something that simulation training can help drivers recognize and deal with. Given that, and given the seriousness of this whole issue, I would suggest that one urgently needed change in FMCSA regulations is to make simulator experience a mandatory part of commercial driver training.”

Whether or not the proposal goes through, simulator training can help prepare drivers for long hours on the road--before they even hit the road.

About Advanced Training Systems LLC:
Advanced Training Systems (ATS) is a technology and engineering firm that has revolutionized the design and manufacture of high-tech simulator systems to improve training for operators of all types of motor-powered vehicles. ATS, the holder of multiple patents in its field, is dedicated to providing cutting-edge adaptive training at an affordable cost to all involved in the transportation industry, resulting in more qualified drivers/operators and safer streets. For more information, visit http://www.atstrainingsystems.com.