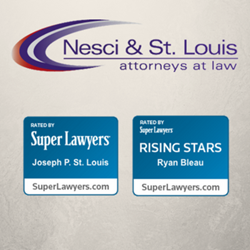 The Tucson DUI and criminal defense law firm of Nesci & St. Louis, PLLC is proud to announce that Joseph P. St. Louis has been named a recipient of the 2017 Super Lawyers Award. Additionally, attorney Ryan Bleau was recognized as a Super Lawyers Rising Star.

Super Lawyers is a rating service of outstanding attorneys from more than 70 practice areas who have attained a high degree of peer recognition. The selection process is based on four thorough steps. It includes a combination of peer nomination, independent third-party research, evaluation by a highly-accredited panel of attorneys, and the final selection. Only 5% of attorneys are selected to Super Lawyers and 2.5% as Rising Stars.

Tucson DUI attorney Joseph P. St. Louis has the distinction of being Arizona’s only lawyer with a dual certification in both DUI and criminal defense. St. Louis has received the Super Lawyers distinction since 2009 and has over 25 years of overall experience as an attorney. He studied at The University of Arizona James E. Rogers College of Law and is a noted speaker and writer for his legal field.

Arizona criminal lawyer Ryan Bleau has been named as a member of the Rising Stars list since 2013. Bleau served as a public defender and received another Rising Star by the Arizona Public Defender Association in 2010. He studied at Quinnipiac University School of Law and has been licensed to practice since 2005.