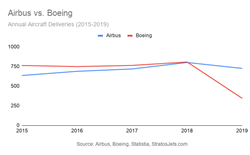 After being in production for more than 20 years, Boeing will halt production of the 737 MAX in January 2020.

This follows two crashes that killed more that 300 people, causing the aircraft to be grounded for more than 9 months due to safety concerns.

Boeing customers have canceled 84 orders since the crisis began.

Airbus is set to deliver more than twice the number of aircraft in 2019 than its rival Boeing.

Airbus sales are down 9% in 2019, but remain reasonably consistent.

All graphs and charts are available here - https://www.stratosjets.co/737-max-crisis