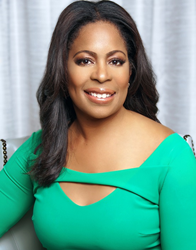 TV One and CLEO TV General Manager Michelle Rice will be honored for her work in media by Temple University’s Klein College of Media and Communications.

As previously announced by Temple University, Rice will be honored with the Lew Klein Alumni in Media Award on October 4 in Philadelphia during a luncheon ceremony for her accomplishments in the media industry. Named in honor of the late broadcasting pioneer Lew Klein, the Alumni in Media Awards pay tribute to both Klein’s influential career and to his 67 years of teaching at Temple.

“Michelle is one of the most influential executives in television, a visionary who keenly understands content that bridges audiences and cultures,” said David Boardman, dean of the Klein College. “We could not be more proud to claim her as an alumna of Temple University and the Klein College of Media and Communication.”

Rice, a 15-year veteran of TV One, was named General Manager in 2018 and has been responsible for the launch of two hit series UNCENSORED and ATL HOMICIDE. Most recently, she shepherded the development of TV One’s new sister network, CLEO TV, an aspirational lifestyle and entertainment TV network serving Millennial and Gen X women of color that launched in January 2019. Prior to joining TV One, Rice held roles at iNDemand, NBC Cable Network and Black Entertainment Television (BET).

Rice joins an illustrious list of past Lew Klein Alumni in Media recipients including musician John Oates, author/columnist Solomon Jones, ESPN SportsCenter’s Kevin Negandhi and journalist Tamron Hall. This event will also honor the professional achievements of five other alumni working in the media and communications industries, and award CNN’s Jake Tapper with the Excellence in Media Award.

As a result of her success, Rice has earned numerous honors and recognitions including being named as a CableFAX Top 100 Executives of 2018 , as well as one of CableFAX’s Top Minorities in Cable and Top Women in Cable. She’s also been honored as a NAMIC Emerging Leader, one of the “Next Wave of Leaders” by Broadcasting & Cable, “40 under 40” by Multichannel News, and a 2016 Multichannel News Wonder Women.

For more information about TV One’s upcoming programming, visit the network’s companion website at http://www.tvone.tv. TV One viewers can also join the conversation by connecting via social media on Twitter, Instagram and Facebook (@tvonetv) using the hashtag #REPRESENT and catch clips and promos on TV One’s YouTube Channel.

ABOUT TV ONE
Launched in January 2004, TV One serves 59 million households, offering a broad range of real-life and entertainment-focused original programming, classic series, movies and music designed to entertain and inform a diverse audience of adult black viewers. The network represents the best in black culture and entertainment with fan favorite shows Unsung, Uncensored, The DL Hughley Show, ATL Homicide, Fatal Attraction and Urban One Honors. In addition, TV One is the cable home of original blockbuster films including When Love Kills: The Falicia Blakely Story, Love Under New Management: The Miki Howard Story, Bobbi Kristina and The Bobby DeBarge Story. TV One is solely owned by Urban One, Inc., formerly known as Radio One, Inc. [NASDAQ: UONE and UONEK, http://www.urban1.com , the largest African-American owned multi-media company primarily targeting Black and urban audiences.

ABOUT CLEO TV
Launched in January 2019, CLEO TV is a lifestyle and entertainment network targeting Millennial and Gen X women of color. Derived from the name Cleopatra, one of the most powerful, trendsetting, rule-breaking and iconic women in history, CLEO TV offers distinctive content that defies negative and cultural stereotypes of today's modern women. Original and acquired series covering topics such as travel, home design, cooking, talk shows, movies, docu-series, and sitcoms include: Just Eats with Chef JJ, New Soul Kitchen, Living by Design with Jake and Jazz, and Lens of Culture. CLEO TV is currently available on Comcast Xfinity and Charter Spectrum in various markets, as well as Philo. CLEO TV is fully owned by TV One, LLC, a brand of Urban One, Inc., formerly known as Radio One, Inc. [NASDAQ: UONE and UONEK, http://www.urban1.com , the largest African-American owned multi-media company primarily targeting Black and urban audiences. Visit http://www.mycleo.tv for more information.