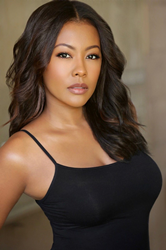 “The Swirl Team continues to be a valued and integral partner to the TV One enterprise as we invest in our original film and programming pipeline,” said TV One’s Executive Producer Jason Ryan.

TV One today announced filming for the production of 13th Step (working title of the film), directed by Courtney Miller ("Games People Play", "Saints & Sinners", and "Twisted House Sitter"), recently wrapped. Denyce Lawton (“Chicago PD”, “A Luv Tale" — BET+) will star as Denae Herndon. Joining Lawton is BJ Britt (“Being Mary Jane”, “Agents of the SHIELD”) who is cast as Seth Blackman. The film is scheduled for release in the fall.

“The Swirl Team continues to be a valued and integral partner to the TV One enterprise as we invest in our original film and programming pipeline,” said TV One’s Executive Producer Jason Ryan. "13th Step (working title) will provide our TV One viewers with another gut-wrenching thriller, expanding our unique film roster.”

“The 13th step” is a colloquial term for when a 12-step old-timer hits on a newcomer with less than a year of sobriety. It can be for a variety of reasons: emotional, financial, or physical. But either way, it's someone in a position of power trying to take advantage of someone weaker. In this film, it refers to a woman’s life thrown into a dangerous tailspin after ending an affair with the dangerous lover she met in Alcoholics Anonymous (AA).

13th Step (working title) is by Courtney Miller & Clifford Mcghee. The film is produced for TV One by Swirl Films. For TV One, Jason Ryan is the Executive Producer in Charge of Production, Donyell Kennedy-McCullough is Senior Director of Talent & Casting, Susan Henry is Senior Director of Original Programming and Production, and Austyn Biggers is Senior Vice President of Original Programming and Production.
﻿
For more information about TV One’s upcoming programming, including original movies, visit http://www.tvone.tv. TV One viewers can also join the conversation by connecting via social media on Twitter, Instagram and Facebook.