TV One Announces Filming Has Wrapped for Original Film "LINEAGE"

TV One Announces Filming Has Wrapped For Lineage, A Film By Emmy Award-Winning Director/Actress Victoria Rowell 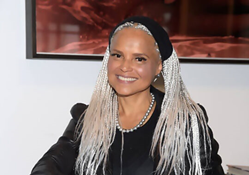 TV One today announced filming for the production of LINEAGE, directed by Victoria Rowell ("Good Sam", "Diagnosis Murder", "The Young & The Restless"), has wrapped. Dawn Halfkenny (“Atlanta”, “Saints and Sinners”) will star as Robyn Montross. Joining Halfkenny is Richard Brooks (“Abbott Elementary”, “The Rich and the Ruthless”) who is cast as Cordell “Dell” Montross, Sr. and Jon Eyez (“The Underground Railroad” and “Walking Dead”) who is cast as Teddy. In addition to directing, Rowell will also play Elaine Montross. The film is scheduled for release in the fall.

“We’re excited to partner again with Victoria Rowell, Jami McCoy-Lankford and Camara Davis, a phenomenal dream team, to tell this story,” said TV One’s Executive Producer Jason Ryan. “Our TV One audience will enjoy all of the plot’s twists and turns in this film.” The collaboration with Rowell continues a longstanding partnership with the Emmy Award-Winning director and actress, who also directed TV One's upcoming film, "Stranger Next Door".

When attorney Robyn Montross finally returns to her hometown of Evansdale at her father's request, she begins to unravel the web of lies that has secured her family's power and prominence in the community for generations. Consumed by guilt, Robin can't hide from her past - and is forced to face the dark secret that has haunted her for years.

LINEAGE is directed by Victoria Rowell and written by Camara Davis. The film is produced for TV One by Jami McCoy-Lankford (Hillionaire Productions). For TV One, Jason Ryan is the Executive Producer in Charge of Production, Donyell Kennedy-McCullough is Senior Director of Talent & Casting and Susan Henry is Senior Director of Original Programming and Production.

For more information about TV One’s upcoming programming, including original movies, visit the network’s companion website at http://www.tvone.tv. TV One viewers can also join the conversation by connecting via social media on Twitter, Instagram and Facebook.

Hillionaire Productions is a feature film and television production company specializing in creating original content. Hillionaire Productions has established niche family-style relationships with producers, filmmakers, and talent across all areas of entertainment content. No matter the genre, we produce a diverse variety of scripted and unscripted, film and television content in all formats. We are dedicated to bringing creative entertainment to life, from concept development to network or studio delivery. As a result of our enduring relationships with award-winning writers, directors, and heads of studios, we continue to have numerous ventures in production and development with broadcast networks, cable and streaming platforms including; Amazon Prime, BET+, Hulu and Binge Black TV. You may also view our projects on TV One, Lifetime and BET.

TV One Networks is the hub of black culture and entertainment with a broad offering of original programming and classic series, serving both diverse audiences for TV One and CLEO TV. Launched in January 2004, TV One currently serves 43 million households and CLEO TV, launched in January 2019, is the sister network with a 34.9 million household reach. Each network has a unique audience that serves viewers with fan favorites from TV One such as Unsung, Uncensored, Fatal Attraction, ATL Homicide, Life therapy, Don’t Waste Your Pretty and Urban One Honors. While CLEO TV, a lifestyle and entertainment network targeting Millennial and Gen X women of color, delivers content that uplifts and inspires today’s modern-day woman. Viewers of CLEO TV can expect award-winning content in both original and acquired series including Culture Kitchen, Living by Design, New Soul Kitchen, Just Eats with Chef JJ, Tia Mowry's Quick Fix and All Things Adrienne House to Home. Both networks are solely owned by Urban One, Inc., formerly known as Radio One, Inc. [NASDAQ: UONE and UONEK, http://www.urban1.com , the largest African-American owned and operated multi-media company.