TV One Premieres New Binge-Worthy Episodes of For My Man on Thursday, February 11 at 9 P.M. ET/8C 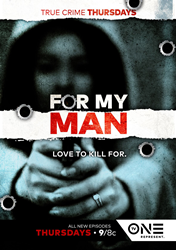 Returning to the TV One true-crime schedule on Thursday, February 11 at 9 p.m. ET/8C is the gripping must-see series FOR MY MAN. Dive into the journey and mystery of these passionate relationships as they ultimately unfold for the worst.

Next to the network's signature True-Crime Mondays programming slate, True-Crime Thursdays continues to expand its programming content to provide its devoted viewers follow along with the in-depth investigations. All-new episodes of FOR MY MAN will broadcast each week until the Season 6 finale on Thursday, April 28, 2021 at 9 p.m. ET/8C.

FOR MY MAN is a true-crime series that features the outrageous and shocking stories of women who have been arrested for a crime they committed in the name of loyalty and love for their man. The series follows passionate culprits who are blinded by love and have no limit as to how far they will go for the men in their lives.

An overview of featured episodes of FOR MY MAN Season 6 are below:

FOR MY MAN: Illusion of Love (Kalene Bartlett)
Premiere: Thursday, February 11 at 9 p.m. ET
After looking for love in all the wrong places, a young mother believes she’s finally found her soulmate. But soon, her happy home becomes a house of horrors. Intoxicated by love, she loses sight of reality and when she comes to, she finds herself wrapped up in a gruesome murder with blood on her hands.

FOR MY MAN: Internal Battle (Jahmeilla Tresvant )
Premiere: Thursday, February 18 at 9 p.m. ET
When a beautiful, 19-year-old with a bright future falls for a bad boy with a shady past, she suddenly finds herself in a battle for her soul. When he tries to pull her into his life of crime, she has to decide how far she is willing to go for love.

FOR MY MAN: Deadly Consequences (Chanell Cunningham)
Premiere: Thursday, February 25 at 9 p.m. ET
A beautiful fashionista is swept off her feet when she meets a man who promises her the world. However, their lavish lifestyle soon proves too good to be true when she discovers his dark secret. Consumed by love, she must decide how far she will go for him and who she is willing to sacrifice along the way.

FOR MY MAN: Walking on the Wild Side (Davina Branch)
Premiere: Thursday, March 4 at 9 p.m. ET
When a savvy salon owner falls hard for a handsome bad boy, she decides to take a walk on the wild side and agrees to help him start an escort service to make extra cash. As the situations begin to turn violent, she has to make a decision whether to stay or go.

FOR MY MAN: Larceny Hearts (Misty Franklin)
Premiere: Thursday, March 11 at 9 p.m. ET
When an ambitious college student falls for a handsome security guard, she knows it’s true love. But when her man falls into the street life after losing his job, he pulls her down with him. Desperate to prove her devotion to him, she sacrifices not only her education, but her freedom in the name of love.

FOR MY MAN: Chained by Love (Toni Rivera)
Premiere: Thursday, March 18 at 9 p.m. ET
A young dancer with big dreams believes she’s found her soulmate when she meets a man who promises to make her a star. Desperate to earn his love, she makes a deal for a shot at the spotlight that ultimately comes at a cost.

FOR MY MAN: Bloodshed and Betrayal (Jasmine Holt)
Premiere: Thursday, March 25 at 9 p.m. ET
An independent, single mom rekindles a relationship with her high school sweetheart after fate brings them together. However, the “happily ever after” is doomed when a risky idea to save their family ends in bloodshed.

FOR MY MAN: Unholy Matrimony (Shavonne Carter)
Premiere: Thursday, April 1 at 9 p.m. ET
A young woman committed to her faith is lured in by the idea of holy matrimony, but she soon learns that her man of God is no saint. His drug use and violent temper lead her down a road of crime, abuse and destruction. However, a godly wife’s loyalty runs deep, but she soon finds herself doing time for his crime.

FOR MY MAN: Bullets on Bourbon Street (Aja Doucette)
Premiere: Thursday, April 8 at 9 p.m. ET
A beautiful, young bartender believes she has found her soulmate when she is swept off of her feet by a charismatic, up-and-coming rapper. But when a fun night out in New Orleans takes a violent turn, the young woman puts her man and sacrifices everything in order to protect him.

FOR MY MAN: Blood is Thicker than Water (Lakisha Boyd)
Premiere: Thursday, April 15 at 9 p.m. ET
After a painful divorce, a beautiful single mother didn’t expect to ever find love again. But fate had other plans when a charming stranger wins her heart. Destermined to keep her new man’s love, the deseprate divorcee will do anything to prove her loyalty to him, including betraying the ones she cared for the most.

FOR MY MAN: By Any Means Necessary (Jocelin Williams)
Premiere: Thursday, April 22 at 9 p.m. ET
When her father passes away, a beautiful young woman finds solace in a new boyfriend. But when he ropes her into one of his criminal schemes, she finds herself in the midst of a brutal blood bath, willing to step in and save her man’s life…by any means necessary.

For more information about TV One's FOR MY MAN, visit the network's companion website at http://www.tvone.tv. TV One viewers can also join the conversation by connecting via social media on Twitter, Instagram and Facebook (@tvonetv) using #ForMyMan and catch clips and promos on TV One's YouTube Channel.