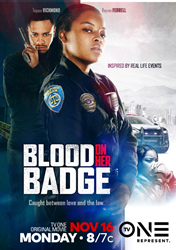 TV One has announced the premiere date of its newest suspense-drama film BLOOD ON HER BADGE airing November 16, 2020 at 8 P.M. ET/7C. Inspired by true crime events, this gripping film details the journey of an ill-fated romance and stars Rayven Ferrell (The Hate You Give, The Bobby Brown Story) Tequan Richmond (Boomerang, Everybody Hates Chris) Miguel Nunez (The Family Business, Bronx SUI) Tetona Jackson (Boomerang, All Night), and Johnell Young (Wu-Tang: An American Saga).

BLOOD ON HER BADGE tells a true crime tale of Dee Johnson, a charming and eager young cop. As Dee settles into her new career, she falls for a captivating younger man. As life begins to fall into place, Dee begins to make risky decisions that ultimately alter her objectivity. With no real moral grounding, Dee allows herself to be manipulated by her lover, resulting in tragic repercussions.

BLOOD ON HER BADGE cast includes:

BLOOD ON HER BADGE was written by Scott Mullen and directed by Kenn Michael with casting by Leah Daniels Butler. The film is produced by The Asylum with Executive Producer David Rimawi, Co-Producer, Paul Bales and Producer David Michael Latt.

For more information about TV One’s upcoming programming, including original movies, visit the network’s companion website at http://www.tvone.tv. TV One viewers can also join the conversation by connecting via social media on Twitter, Instagram and Facebook using the hashtags #BLOODONHERBADGE and #REPRESENT.

ABOUT THE ASYLUM:
The Asylum is one of the world’s leading brand-oriented motion picture an television studios. With a focus on high-concept, market-driven entertainment, like the SHARKNADO franchise, The Asylum finances, produces and releases 25 films per year through its direct pipeline to the nation’s top retailers and its network of international partners. Since its founding in 1997, The Asylum has released more than 500 films and has built a library of over 250 original productions, including top-rated movie premieres for Syfy, Lifetime, Animal Planet, TV One and ION networks. In addition, The Asylum is now in production of season 5 of Syfy’s longest running, top rated show Z NATION, a critically-acclaimed action-horror series.

ABOUT TV ONE:
Launching in January 2019, CLEO TV is a lifestyle and entertainment network targeting Millennial and Gen X women of color. Derived from the name Cleopatra, one of the most powerful, trendsetting, rule-breaking and iconic women in history, CLEO TV will offer quality content that defies negative and cultural stereotypes of today's modern women. The network promises a unique and diverse offering of short-form and long-form content including travel, home design, cooking, talk shows, movies, docu-series, sitcoms and much more. CLEO TV is fully owned by TV One, LLC, a brand of Urban One, Inc., formerly known as Radio One, Inc. [NASDAQ: UONE and UONEK, http://www.urban1.com , the largest African-American owned multi-media company primarily targeting Black and urban audiences. CLEO TV will join the roster of Urban One, Inc.’s brands including TV One, Radio One, Reach Media, iOne Digital, One Solution and R1 Digital. Visit http://www.mycleo.tv for more information.