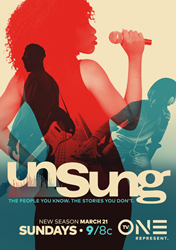 TV One announced all-new episodes of its original, award-winning series UNSUNG premiering on Sunday, March 21 starting at 9 p.m. ET/8C. The return of UNSUNG kicks off a night of back-to-back premieres of auto-biographical content joining the previously announced premiere of UNCENSORED, immediately following at 10 p.m. ET/9C.

The six-time NAACP Image Award-winning series UNSUNG returns with nine new tantalizing episodes. UNSUNG, one of the network’s longest-running series, highlights the careers and explores the personal lives of some of the most talented, versatile, and influential black vocal artists. The new episodes will launch with a profile of one of the 80’s most electrifying performers, Morris Day. The season continues with equally unforgettable stories from a wide array of artists including Leela James, Hezekiah Walker, Keith Washington, Mystikal, Syleena Johnson, Bobby V, Lyfe Jennings, and The Jones Girls.

UNSUNG delves into the lives of trailblazing musical legends whose full stories and journeys have yet to be explored. The series celebrates the lives and careers of artists or groups who, despite great talent, have been under-appreciated or under-recognized. Through first-hand accounts, interviews with family and friends, and archival footage, each episode weaves a tale of the highs and lows of a life in the limelight.

Airdates of TV One's upcoming new episodes of UNSUNG are detailed below:

UNSUNG is narrated by actor Gary Anthony Williams and is Executive Produced by Arthur Smith and Frank Sinton of A. Smith & Co. Productions. Mark Rowland also serves as Executive Producer. For TV One, Jason Ryan is Executive in Charge of Production; Donyell Kennedy-McCullough is Senior Director of Talent & Casting; and Robyn Arrington Greene is Head of Original Programming and Production.