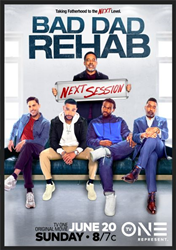 “Being a dad is a layered, yet rich experience. It was awesome to be part of a film that captures the reality of fatherhood which is not easy, but very gratifying,” said Big Daddy Kane.

Following the success of its popular film BAD DAD REHAB, TV One today announced the premiere of BAD DAD REHAB: THE NEXT SESSION. The film features a brand-new cast that includes rapper Anthony “Big Daddy Kane” Hardy (Something From Nothing: The Art of Rap, Dead Heist) as Owen, Lamman Rucker (“Greenleaf”, “Why Did I Get Married”) as Mr. Arnold, Blue Kimble (“Monogamy,” “Ruthless”) as Chauncey, Onyekwere Eme-Akwari (“Queen of the South”) as Marshall, Carlo Mendez (“90210,” “Parks and Recreation”) as Hosea, Chrystale Wilson (“The Rich and the Ruthless”) as Marjory. The film will air on Sunday, June 20 at 8 P.M. ET/7C.

“The film is a fun, entertaining and authentic way to address the struggles and varied realities of fatherhood,” said Jason Ryan, Executive in Charge of Production for TV One. “I’m excited to help bring this important story to our audience as we celebrate the men who shaped us this Father’s Day.”

BAD DAD REHAB: THE NEXT SESSION follows the new class of Bad Dads hailing from Jersey City, New Jersey who must confront their personal demons in order to get their act together and become better dads. Hosea (Mendez) is more concerned about being his rebellious son’s best friend than disciplining him. Marshall (Eme-Akwari) works pyramid schemes in his mancave instead of helping his frustrated wife and son. Chaucey (Kimble) holds a grudge against his ex-girlfriend oblivious that it’s hurting their young daughter. Owen (Hardy) spent thirty years denying his daughter from an affair but now wants to make amends before her impending wedding.

Bad Dad Rehab: The Next Session is written by Keronda McKnight, directed by Juwan Lee with casting by George Pierre. The film is produced for TV One by Swirl Films with Eric Tomosunas, Keith Neal, Ron Robinson and James Sepplefrick serving as Executive Producers. For TV One, Jason Ryan is the Executive Producer in Charge of Production, Donyell McCullough is Senior Director of Talent & Casting and Robyn Greene Arrington is Vice President of Original Programming and Production.

For more information about TV One's upcoming programming, including original movies, visit the network's companion website at http://www.tvone.tv. TV One viewers can also join the conversation by connecting via social media on Twitter, Instagram and Facebook (@tvonetv) using the hashtag #BADDADREHAB.

ABOUT TV ONE
Launched in January 2004, TV One serves 49 million households, offering a broad range of real-life and entertainment-focused original programming, classic series, movies, and music designed to entertain and inform a diverse audience of adult black viewers. The network represents the best in black culture and entertainment with fan favorite shows Unsung, Uncensored, ATL Homicide, Fatal Attraction, and Urban One Honors. In addition, TV One is the cable home of original blockbuster films including When Love Kills: The Falicia Blakely Story, Love Under New Management: The Miki Howard Story, Bobbi Kristina, and The Bobby DeBarge Story. TV One is solely owned by Urban One, Inc., formerly known as Radio One, Inc. (NASDAQ: UONE and UONEK, http://www.urban1.com), the largest African-American-owned multi-media company primarily targeting Black and urban audiences.