Political Analyst Karen Finney to Host "Represent the Vote: Our Voice, Our Future" Conversation Series; Episodes To Be Broadcast Ahead of the 2020 Presidential Election Starting Thursday, October 22nd at 12 P.M. ET/11C 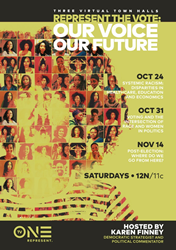 TV ONE announced today the presentation of REPRESENT THE VOTE: OUR VOICE, OUR FUTURE, a three-part series of virtual town halls designed to tackle various social, economic and political issues impacting black women voters across the U.S. CNN commentator and political analyst Karen Finney will moderate and host the series which will debut on TV One and CLEO TV's Facebook and YouTube channels starting Thursday, October 22 at 12 P.M. ET/11C with an encore presentation on Saturday, October 24 at 12 P.M. ET/11C on TV One and CLEO TV.

Karen Finney is a leading democratic strategist and Political Commentator for CNN. She is an independent consultant working with political and corporate clients on crisis communications, branding, public affairs, polling and strategy. Karen was a Senior Advisor to Stacey Abrams' Gubernatorial campaign, the Democratic National Committee and AL Media in the 2018 election cycle. Finney served as Senior Advisor and Senior Spokesperson for Hillary Clinton's 2016 presidential campaign.

"It's an honor to be a part of TV One's Represent the Vote: Our Voices Our Future, and to be joined by a group of dynamic, insightful leaders who are drivers of social, cultural and political change," remarked Karen Finney. "As we lift up and speak to the issue and concerns of Black women and our community, our goal is to provide viewers the information, clarity and inspiration they need to go vote in record breaking numbers."

A panel of politicians, esteemed experts and thought leaders will examine the most critical issues impacting Black America such as education, voter suppression, healthcare, criminal justice, economic reform and how black women, in particular, can be a part of the political conversation and galvanize their communities in preparation for the 2020 Presidential Election, considered to be one of the most consequential elections in history.

"The current social and political climate demands we support efforts to mobilize the Black vote, especially the power of the black female electorate. It is vital that we utilize our television networks and digital platforms to inform our audience about key ballot issues impacting our community, the core positions and views held by our nation's leaders and by those seeking to hold elected offices up and down the ballot, and the ability for voters to hold elected official accountable for promises made during this critical election," noted Michelle Rice, General Manager of TV One and CLEO TV. "The accomplished leaders and social activists participating in the three town hall panels will undoubtedly help viewers be a part of the conversation, be more informed citizens on the key issues in this election cycle and most importantly, to inspire everyone to take the most important action - VOTE!"

An overview of featured episodes of REPRESENT THE VOTE: OUR VOICE, OUR FUTURE are below:

Ep. 1 - The Issues: What's at Stake for Black Women and Our Families During This Election?

Broadcast: Saturday, October 24 at 12 P.M./11C
(broadcast simulcast on TV One and CLEO TV)

Episode 1 Description:
TV One's REPRESENT THE VOTE: OUR VOICE, OUR FUTURE looks at the power of the Black vote, how Black women are maximizing their collective voices and what's at stake in the 2020 election. Host Karen Finney and the country's top thought leaders break down the issues impacting Black America to help ensure voters make informed choices at the ballot box this November.

Ep. 2 - The Intersection of Race and Gender in Politics and the Power of the Black Female Vote

Episode 2 Description:
TV One's REPRESENT THE VOTE OUR VOICE, OUR FUTURE stands at the intersection of Black women and politics. Host Karen Finney brings together some of the country's top thought leaders as they look beyond the distractions to the real issues that impact Black women, the candidates and the voters.

Episode 3 Description:
TV One's REPRESENT THE VOTE: OUR VOICE, OUR FUTURE takes on the results of a monumental 2020 election and asks the question, "Where do we go from here?" Host Karen Finney and an esteemed panel of experts discuss the path forward for the next four years and beyond.

Click here to view the trailer for REPRESENT THE VOTE: OUR VOICE, OUR FUTURE

REPRESENT THE VOTE: OUR VOICE, OUR FUTURE is produced for TV One by Black Robin Media with Lynne Robinson serving as Executive Producer and Jocelyn Sigue as Producer. For TV One, Susan Henry is the Executive Producer in Charge of Production, Donyell McCullough is Senior Director of Talent & Casting, Robyn Greene Arrington is Vice President of Original Programming and Production.

For more information about TV One's upcoming programming, visit the network's companion website at http://www.tvone.tv. TV One viewers can also join the conversation by connecting via social media on Twitter, Instagram and Facebook (@tvonetv) using the hashtag #RepresentTheVote and catch clips and promos on TV One's YouTube Channel.

ABOUT TV ONE
Launched in January 2004, TV One serves 59 million households, offering a broad range of real-life and entertainment-focused original programming, classic series, movies and music designed to entertain and inform a diverse audience of adult black viewers. The network represents the best in black culture and entertainment with fan favorite shows Unsung, Uncensored, The DL Hughley Show, ATL Homicide, Fatal Attraction and Urban One Honors. In addition, TV One is the cable home of original blockbuster films including When Love Kills: The Falicia Blakely Story, Love Under New Management: The Miki Howard Story, Bobbi Kristina and The Bobby DeBarge Story. TV One is solely owned by Urban One, Inc., formerly known as Radio One, Inc. [NASDAQ: UONE and UONEK, urban1.com ], the largest African-American owned multi-media company primarily targeting Black and urban audiences.