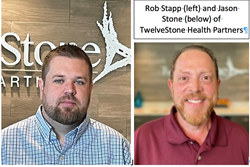 Rob Stapp brings 18+ years of revenue cycle management experience. Most recently he was a senior manager of revenue cycle at PopHealthcare in Franklin, TN. Jason Stone joins TwelveStone with more than 25 years of experience. Prior to joining TwelveStone, he was director of product delivery and information technology field support with SP+ in Nashville, TN.

About TwelveStone Health Partners
TwelveStone Health Partners incorporates the objective of glorifying God into its mission by delivering a higher level of service to partners and patients. As an organization, TwelveStone supports the transition from acute to post-acute care environments and the transition from sickness to health. Founded in 2016 TwelveStone is the third iteration of pharmacy organizations founded by Shane Reeves and the Reeves family. Today TwelveStone is rapidly expanding across the Southeast anchored by spa-like infusion centers conveniently located in suburban communities supported by additional services including package medications, home infusion, enteral and injections. TwelveStone is dedicated to providing the highest level of care to those with chronic, complex conditions in the environment that is most convenient for both the patient and their loved ones. For more information, visit http://www.12stonehealth.com.