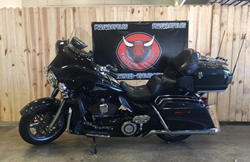 The most recent of the three motorcycles available is a gray 2013 Harley Davidson CVO™ Ultra Classic Electra Glide 110th Anniversary model. Its mileage sits at 17,888 miles and is priced at $17,995 with a potential $500 dealer discount. Customers can find the model at the dealer’s Lubbock location.

Another anniversary model available is a black 2008 Harley Davidson Ultra Classic Electra Glide. The model was built for the company’s 105th anniversary and receives up to 92 ft.-lbs. of torque. It can be found at the dealer with just 8,166 miles on it for a price of $12,995.

The last anniversary model the dealer currently has is an orange 2008 Harley Davidson Road Glide Anniversary, which was also built for the company’s 105th year in existence. The motorcycle has 61,037 miles on it and is currently listed at $11,995. Those interested in giving it a test drive can find it at the dealer’s Lubbock location.

Those interested in any unique model can find them at either Twisted Cycles locations. The Lubbock lot can be found at 2401 South Loop 289 or contacted by phone at (806) 687-7300. Meanwhile, the Dallas location can be reached by phone at (214) 937-5959 or at their location at 7700 S Interstate 35E. To schedule a test drive, customers can also find the dealer online at https://www.twisted-cycles.com/.