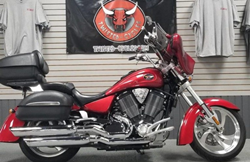 The first model available at Twisted Cycles is a gray 2017 Victory Kingpin. It possesses an engine that receives displacement levels of up to 1179 cc’s and was processed in the store on July 31. The model has a mileage total of just 7,329 and is available at the dealership’s North Dallas location.

Another pre-owned Victory motorcycle available is a red 2006 Victory Hammer. Equipped with a V-Twin four-stroke engine, the model has an air-cooled system. It has 8,893 miles on it and has been at the Dallas, Texas location since mid-July.

The final Victory motorcycle at Twisted Cycles is a pre-owned 2005 Victory Kingpin. It is a light-duty touring bike that has 13,329 miles currently on it. Beyond mileage, the model also has a V-Twin four-stroke engine with a dual exhaust system. Alongside its red and black color scheme, the model has several compartments for storage. It is currently located in the Lubbock, Texas location.

Customers interested in purchasing a pre-owned Victory motorcycle are welcomed to contact Twisted Cycles. To view the models in person or to give one a test drive, drivers can find each model at their given dealership locations. Twisted Cycles can be found at their Dallas location on 7700 S Interstate 35 E in Corinth or in Lubbock, Texas at 2401 S Loop 289. For other ways, customers can call the dealership team at 833-912-0272 or view their website online at https://www.twisted-cycles.com/.