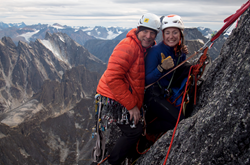 Sterling athletes, Jim Ewing and Maureen Beck are the first to attempt an unassisted adaptive climb of the Lotus Flower Tower in Canada's Cirque of the Unclimbables

I should have gone down when I started feeling sick, but didn’t want to pass up the opportunity to get the top.

Today, Sterling, a rope and life-safety equipment company, announced two of their athletes, Jim Ewing and Maureen Beck, attempted the first unassisted adaptive climb of the Lotus Flower Tower in Canada’s Cirque of the Unclimbables. Although Jim was hit with an unexpected illness, which made it difficult for him to lead, the duo decided to persevere and with some assistance from rigger Pat Goodman and cinematographer Taylor Zann, they were able to safely summit.

Jim and Maureen have a few things in common; they are both from Maine, climb hard, and are missing a limb. Maureen was born without her left hand and Jim had his left leg amputated after a devastating fall while climbing Cayman Brac in 2015. Strangers who met last December, the unlikely duo (nearly 20 years apart in age) decided to attempt this climb and began training three months ago. For two very experienced climbers, this attempt quickly proved that even with a lot of training and preparation nothing is ever guaranteed when it comes to alpine climbing.

“It was the first time that working harder and training did not necessarily equal success,” said Maureen Beck, a Paraclimbing World Champion and Sterling Team Athlete. “I went in feeling prepared, but I definitely learned a lot on my first expedition.”

Even the journey through the Yukon to arrive at the Cirque of the Unclimbables was a feat. Faced with logistical obstacles and being asked at one point if they could trailer their own plane engine for the float plane, the team faced each challenge head on, took their time and figured out a solution.

“For me, as an amputee, I developed the philosophy just keep moving and you can accomplish some amazing things,” said Jim Ewing longtime New England rock and ice climber and Sterling Product Engineer. “I should have gone down when I started feeling sick, but didn’t want to pass up the opportunity to get the top.”

Their incredible journey to the top will be featured in a short film premiering in 2019 by Rainier Films. For more information follow @theadaptivefilm.

To hear more about Jim and Maureen’s personal background and a description of their attempt at the first unassisted adaptive climb of the Lotus Flower Tower in their own words, check out their two-part interview with climber, Kevin Jorgeson on the Freedom to Focus Podcast. Part Two will air September 25, 2018.

About Sterling
Sterling is a premier rope and life-safety company dedicated to bringing climbing, rescue and utility safety products into the 21st century. For the past 25 years, Sterling has been developing and manufacturing the world’s finest ropes, hardware and related gear, giving climbers, arborists, firefighters and utility workers the ability to focus on the task at hand. From its headquarters in Biddeford, Maine, Sterling engineers, technologists and craftsmen build on advanced R&D, customer needs analysis, innovative manufacturing and stringent testing to perfect every aspect of production and create the industry’s most versatile and highly-rated equipment. Sterling ropes and cords fit seamlessly into any pack and enable the Freedom to Focus.