Arca Labs answers the call for a better box that lights up, keeps contents fresh and confines odors Find it now on Indiegogo. 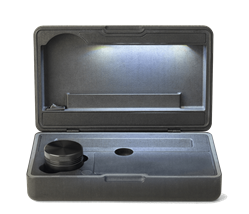 After years of using poorly designed and cheaply made rolling boxes, we decided to create a box that would perform anywhere we might take it.

Prepare to roll in HD with the debut launch by Arca Labs; The Rolling Box, available now on crowdfunding platform Indiegogo.

“After years of using poorly designed and cheaply made rolling boxes, we decided to create a box that would perform anywhere we might take it,” said Danny Jones, Director of Arca Labs. “Be it a mountain top at night, a day at the beach or just at a friend’s house. It was clear nothing suitable was currently on the market, so we decided we needed to create our own - for our benefit (as well as our future customer’s)”

One of the biggest challenges for a rolling box is to keep its contents fresh and lock any unwanted odors safely inside. The Arca Labs Rolling Box has been meticulously designed with a magnetic silicone seal that keeps its contents not only fresh, but also discreet so you can take it with you anywhere, anytime. Gone are the days of using plastic containers designed for leftovers.

For more information about the Arca Labs Rolling Box and to pre-order at discounted early-bird prices, visit the crowdfunding campaign page on Indiegogo.

About Arca Labs LTD:
Arca Labs specializes in quality rolling accessories and storage. The company was founded in the UK in 2019 by Danny and David Jones. All products are designed with the modern smoker in mind. Arca is Latin for box and is often translated as a box or chest to hold valuables. For more information visit: http://www.arcalabs.co.uk