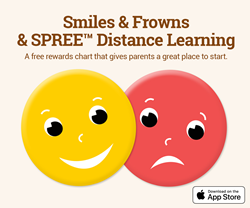 The biggest thing parents can do to support distance learning is to help their kids build good habits around a plan for success.

Space. Preparation. Routine. Engagement. Excellence. If you’re a parent of school-age kids, pull out your iPhone and get to know those five words. They may just save the school year.

At least, Brad Jones and Tommy Giovagnoli, the two inventor-dads behind the rewards chart app Smiles & Frowns™, hope they will. These are the five keys to their new SPREE Distance Learning™ plan they’re introducing with a major app update this week. (Smiles & Frowns, free on iOS)

“We have kids ourselves, so we know how hard remote school has been. Last year, we all kind of coasted over the finish line. But starting the school year without a plan? That’s ten times harder.”

The way Brad and Tommy see it, parents feel like they’ve been given half of the responsibility – but none of the tools – to help their kids succeed at home learning. So they wanted to at least give parents a good place to start.

So how do two dads tackle a monster challenge like this one? By reading, rolling up their sleeves, talking to teachers – and just getting to work. Of course, it doesn’t hurt when you already have a well-reviewed positive behavior app out there.

“Hey, Dads like to fix things, which is how Smiles & Frowns started,” Tommy G said. “For distance learning there’s plenty of expert advice there, but no plan. So we boiled it down to a few simple things you can focus on and built a behavior chart around that.”

Their “SPREE” plan is a rewards chart meant to help kids build strong habits around what they’ve identified as five keys for distance learning success:

1. Creating and maintaining a dedicated SPACE that is specifically built for learning
2. Strengthening their PREPARATION skills, so they log in ready to learn each day
3. Establishing a ROUTINE that will keep them on a dependable road to results
4. Supporting active ENGAGEMENT so kids lean into their studies instead of laying back
5. Encouraging a mindset of EXCELLENCE that help kids continue to set goals and achieve

With their app, Kids earn Smiles for a variety of good behaviors built around these five areas, and Frowns when they do things that work against success, like playing with their cell phones during study time or logging into class from bed. Smiles minus Frowns equals the Spending Smiles kids use to earn whatever Rewards they agree on with their parents. It’s simple and effective.

“The biggest thing parents can do to support distance learning is to help their kids build good habits around a plan for success.” Jones says, “And that’s what our app does best.”

Tom “Tommy G” Giovagnoli is a writer, problem solver and Emmy-winning marketing man who grew up in a factory making the “Iron Mike” baseball pitching machines his own father invented. Brad Jones is a life-long builder, coder and senior data expert can’t resist the challenge of a really good challenge. Together, these dads operate under the working philosophy of Parents, Unite! to create solutions by parents, for parents, so we can all get through this crazy ride together.