The fabled Beverly House, the showplace of publishing magnate William Randolph Hearst, known for its memorable movie scenes in “The Godfather” and “The Boduguard” is back on the market. And the Paramour Estate that the 1930’s tabloids named “The Most Beautiful Home in Hollywood” is on the open market for the first time. Both homes are featured this month at TopTenRealEstateDeals.com. 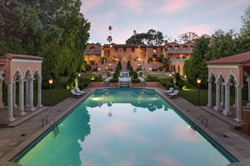 Beverly House is well known for its movie scenes in “The Godfather” and “The Bodyguard.”

“Historic Hearst Mansion Back On Market At Reduced Price”

Located in the heart of Beverly Hills, the fabled Hearst Beverly House, the showplace of publishing magnate William Randolph Hearst, is back on the market at a reduced asking price of $89.75 million - down from $185 million in 2016. One of California’s most historic homes, Marion Davies, Hearst’s girlfriend, purchased the mansion in 1946 as a gift for Hearst. The couple moved there from the Hearst Castle, where they had been living in another historic California mansion, and stayed until William’s death in 1951.

Beverly House is most well known for its memorable movie scenes in “The Godfather,” where Hollywood movie producer Jack Woltz woke up to a bloody horse head in his bed, and the glamorous estate where Whitney Houston’s character lived in “The Bodyguard.” The mansion was also a favorite of the Kennedy family, where John and Jackie spent part of their honeymoon in 1953, and later became the West Coast presidential election headquarters for JFK’s 1960 presidential campaign. In 2018, Beyoncé filmed part of her groundbreaking visual album “Black Is King” on the grounds, and in 2019, Adele held her 31st birthday party there.

Designed in 1927 by Gordon Kaufmann, the architect who did the Hoover Dam, Hollywood Palladium, Los Angeles Times building and the Santa Anita Racetrack, Hearst’s Beverly House is the quintessential emblem of Hollywood’s Golden Era. The estate is well known for its H-form architecture characterized by long colonnades, wide balconies, arched floor-to-ceiling windows and its spaciousness. Some of the spaces include a nearly 9-foot-tall Dennis Abbe mural that was commissioned by Hugh Hefner; a stunning two-story library with hand-carved paneling and a wraparound walkway; a formal living room with its 22-foot-high, hand-painted, arched ceiling; a state-of-the-art spa; a billiards room with herringbone parquet floors and an intricately designed ceiling and carved fireplace - both from the Hearst Castle in San Simeon. The gardens, designed by landscape architect Paul Thiene, are a focal point including cascading waterfalls to the pool. The main house and two guest houses sit on 3.5 acres.

The Beverly House listing agents are Anthony Marguleas of Amalfi Estates in Los Angeles, Gary Gold of Hilton & Hyland in Beverly Hills and Zizi Pak of Rodeo Realty in Beverly Hills. The property is listed by order of the U.S. Bankruptcy Court.

“1930’s Tabloids: “The Most Beautiful Home in Hollywood!”

In the early 1900s, Southern California became the glamour capital of the world, where some of the world’s most famous movie stars, directors and producers tried to outdo each other with their ritzy mansions. There was the Louis B. Mayer Estate in Bel Air; a number of mansions designed by Wallace Neff for the biggest celebrities, including Charlie Chaplain, Fredric March and Harpo Marx; and the most famous home of all: Pickfair for Mary Pickford and Douglas Fairbanks. But according to the tabloids of the era, the most beautiful home of them all was the Canfield-Moreno Estate, now known as Paramour Estate. It is now on the open market for the first time, priced at $39.995 million.

Heiress-and-socialite Daisy Canfield, with the Pan American Petroleum fortune in her back pocket, could have almost anything she wanted. And what she wanted most was the grandest home in Los Angeles. Daisy hired the most famous architect of the time to design and build a monument-mansion where she could overlook Hollywood from the highest ridge in the Los Angeles basin. It was the most opulent mansion of the era and like many of the old L.A. mansions, was full of celebrity connections and intrigue.

Perched on a bit over four acres, the four-story, walled, 22,000-square-foot home with 15 bedrooms and 15 baths is not anyone’s regular ho-hum mansion. Created by Robert D. Farquhar, the architect to the stars who also did the Owlwood Estate - once owned by both Tony Curtis and Cher, Paramour played host to lavish celebrity parties and was ultimately dubbed by the tabloids as "The Most Beautiful Home in Hollywood." Features include ceiling beams painted to match the colors in the home’s fabrics, a bar front covered in zebra skin, a grand ballroom with 25-foot-high ceiling, gilded mirrors, bold colors, crystal chandeliers, a myriad of places to dine, marble-hand-tiled pool, sun room, lower-level staff quarters, and 360-degree views that stretch from the Pacific Ocean to the San Gabriel Mountains. There are four guest cottages, two guest suites, lush landscaping with rose gardens, and parking for 50 cars.

The listing agent for the Paramour estate is Sally Forster Jones of Compass, Los Angeles.