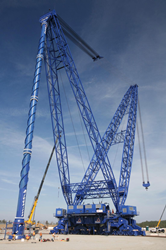 "We are excited to bring this piece of equipment back on the market. It has successfully executed numerous critical lifts over 1,400 tons at unprecedented reaches." -Thom Bostrom, Sr. Vice President

Companies looking to expand their reach in high capacity lifting can now acquire an A-Frame Ring Derrick (AFRD) Super Crane from Bigge Crane and Rigging Co. Designed in-house by Bigge and first put to work in 2011, these AFRDs are coming back on the market after completing projects at nuclear power plants in the United States. The AFRD has a boom capacity of 4,000-tons with 560 feet of main boom, rotating on a 280-foot track ring. These machines not only have a real-world track record for safety, but also for savings in time and money with the ability to lift within a hook coverage area of 28 acres.

Designed and built for 21st Century modular construction heavy lift requirements, the AFRD Super Crane is a specialized machine built to meet the needs of nuclear power development, oil platform fabrication and decommissioning, and marine construction. The AFRD has simplified many jobsite logistical problems by allowing for the elimination or consolidation of site heavy transport requirements through its massive working range coverage and lift capacity. Once erected, the AFRD can go immediately to work saving companies downtime and reducing requirements for additional crane service. You can read the complete load chart and learn more about machine specifications and applications by visiting afrd.bigge.com.

“We are excited to bring this piece of equipment back on the market. It has successfully executed numerous critical lifts over 1,400 tons at unprecedented reaches. The AFRD performs like nothing else and has the ability to replace the use of additional heavy lift equipment on an entire project site.” - Thom Bostrom, Sr. Vice President

Since the 1930’s Bigge has been associated with the innovation and creation of new machines and equipment for the crane and rigging industry. Bigge Crane and Rigging Co. has been the premier provider of crane rentals and crane sales worldwide. Headquartered in the San Francisco Bay Area, Bigge operates a strategic network of service locations nationwide, providing logistical and field support throughout the United States. Safety, teamwork, passion, and innovation are part of Bigge’s core values, and its teams have generations of combined experience in their industry. Bigge Crane and Rigging Co. continues to lead the crane industry into the 21st century and is still managed by the Bigge family.