Customers looking for a pre-owned truck in the Wolfforth, TX area can find two models available in the Matador Motors Inventory 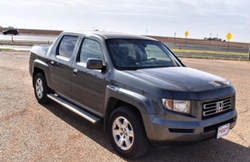 The used and pre-owned market for trucks can be difficult to traverse. Due to their popularity in Texas, many pre-owned trucks are purchased quickly. However, Matador Motors has two used trucks available in their inventory: a 2007 Ford F-150 Lariat and a 2008 Honda Ridgeline. Both models can be found at the dealership now in the Wolfforth, TX area.

Widely known for its capabilities, the Ford truck lineup is represented at Matador Motors by a black 2007 Ford F-150 Lariat. The vehicle was recently added to the Matador Motors inventory and offers both space and performance. The model offers both four-wheel drive capabilities as well as a SuperCab interior. Such models typically have a 5.4-liter Triton V8 engine that offers up to 300 horsepower and is paired with a four-speed automatic transmission.

Another pre-owned truck in the Matador Motors inventory includes a gray 2008 Honda Ridgeline. Armed with four-wheel drive, the model has been driven for 149,305 miles. It offers an EPA-estimated 20 highway MPG with its V6 engine, which provides up to 247 horsepower and 245 ft-lbs. of torque. The model at the dealership also offers a Crew Cab with dual-zone automatic climate control, front leather heated bucket seats and more.

Those interested in purchasing or leasing the pre-owned models listed above are invited to contact Matador Motors directly. Associates will work with anyone, regardless of credit score or history. The dealership can be found at 214 E Highway 62/82 in Wolfforth. Otherwise, an associate can be reached by phone at 806-833-7300. Plus, customers can view the entire dealership inventory online at https://www.matadormotors.com/.