A Music Artist moonlighting as a Twitch streamer has broken the world record for the longest time playing a Destiny game. From November 10th to November 12th, Tyler “TYDEL” DeLucia, an Artist and Twitch streamer, broke the record for the longest time playing a Destiny game in a single run. Destiny 2 is a free-to-play online-only multiplayer first-person shooter video game. Set in a mythic science fiction world, this game has received numerous favorable reviews from both critics and players. Players of this game assume the role of a Guardian, protectors of Earth's last safe city as they wield a power called Light to protect the Last City from different alien races and combat the looming threat of the Darkness. 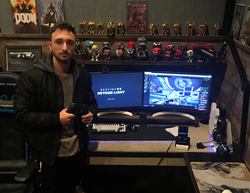 TYDEL managed to play Destiny 2 for an impressive 51 hour 58 minutes on a single run, thus setting a new world record and shattering the old one. While attempting to set a new world record for the longest time playing a video game, players are obliged to follow several rules. One important rule is that players are only allowed 10 minutes of rest every hour. This means that players must be playing at all the other times in order for the run to count. Additionally, when the game requires input (Example: Coming out of a loading screen, or loading into a multiplayer match), players have 20 seconds to provide that input to their controller or keyboard. The first 48 hours of the record can be seen here. The rest of the stream can be found on TYDEL’s Twitch page as Twitch only allows streams to be 48 hours long or shorter.

Destiny 2 is a world-renowned first-person shooter game that incorporates RPG and MMO game features. Players can choose from the same three-character classes as its predecessor, Destiny. The three classes are Warlock, Hunter, and Titan. After choosing a class, players can choose one of the three species of the character: Human, Awoken, or Exo. Player versus environment makes up most of the game, where players can participate in Story Missions, Lost Sectors, Strikes, Raids and more. Players can also explore numerous areas such as Earth’s European Dead Zone and Cosmodrome, centaur planet Nessus, Jupiter’s Icy moon Europa and more. If PvE doesn’t quite do it, players can take on other players in the “Crucible” in a slew of PvP game modes. Destiny’s new expansion Beyond Light is out now! You can check out TYDEL stream Destiny 2: Beyond Light and other games on his Twitch page here.

Besides gaming and Twitch streaming, TYDEL is a Music Artist. His latest songs can be found on his YouTube page, TYDEL Music. His two newly released pieces, “There 4 U” and “Closer”, have gathered thousands of views and dozens of positive comments. Fans can support him by checking out his music page here.