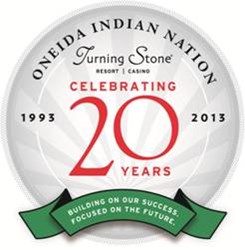 Mike Tyson and Tiger Woods are living legends in their respective sports, and their appearances at Turning Stone are a true testament to the premier sporting destination we have become.

“Turning Stone is extremely proud that Mike Tyson chose our award-winning resort for his first fight as a promoter,” said Oneida Indian Nation Representative and Nation Enterprises CEO Ray Halbritter. “As an incredible athlete and renaissance man who continues to reinvent himself, we understand that Tyson could have gone anywhere for his debut, and we are deeply honored he chose Turning Stone.”

Turning Stone has quickly become known not only as upstate New York’s boxing capital, but as a go-to locale for a variety of world-class sporting events. “Within a handful of days, two of the world’s most recognized athletes will appear at Turning Stone,” said Halbritter. “Both Mike Tyson and Tiger Woods are living legends in their respective sports, and their appearances at Turning Stone are a true testament to the premier sporting destination we have become.”

Tyson will participate in fight week events leading up to the bouts and will have select media availability. A live press conference with Tyson will be held in the Turning Stone Showroom on Wednesday, August 21 at 2:00 p.m.

Professional media requesting credentials for the boxing event and/or seeking to participate in the press conference with Mike Tyson must contact Oneida Nation Public Affairs Manager Brett Stagnitti at (315) 829-8310 or bstagnitti(at)oneida-nation(dot)org.

Following the Friday boxing matches, Turning Stone will continue its incredible lineup of sporting events with the third annual Turning Stone Races, Saturday, August 24 and Sunday, August 25. The weekend will include a 5K, 10K and half-marathon race that start and finish on the grounds of Turning Stone Resort Casino. For more information, and to register to participate, go to http://www.turningstoneraces.com.

A premier four-season, destination resort in upstate New York, the Oneida Indian Nation’s Turning Stone Resort Casino is conveniently located about 30 miles east of Syracuse at NYS Thruway exit 33. Turning Stone was named “Most Excellent Golf Resort” in 2010 by Condé Nast Johansens. The Academy of Country Music named Turning Stone “Casino of the Year” in 2009. The resort offers world-class gaming, golf, entertainment, accommodations and spa facilities, and has earned AAA Four Diamond ratings for The Lodge, The Tower Hotel, and Wildflowers restaurant. For more information and reservations, call (315) 361-7711 or (800) 771-7711. Visit the web site at http://www.TurningStone.com/.