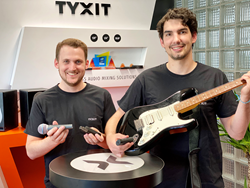 Musicians can finally play anywhere with confidence, peace of mind and no complicated wired setups. TYXIT really does bring expensive, top-notch wireless technology – until now reserved for pros – into the hands of all musicians, for much less.

In a world where hyper-wireless connectivity and intuitive apps have changed the way we work and play, many bands still rely on vintage-era equipment – from analog collectors and mixing consoles, to microphones and effect pedals. TYXIT CEO, Gaétan Fuchs, says this was precisely the motivation behind the company’s new technology.

“We thought it was time for musicians to get a glimpse of the future they have been left out of for so long, so we turned a complicated and expensive cabled setup into an easy and affordable plug-and-play experience. Musicians can finally play anywhere with confidence, peace of mind and no complicated wired setups. TYXIT really does bring expensive, top-notch wireless technology – until now reserved for pros – into the hands of all musicians, for much less.”

TYXIT’s technology is easy to use. Each musician or singer plugs a T.ONE transmitter into their instrument or microphone, the sound signals are immediately transmitted to each of the receivers plugged into the musicians’ in-ear headset and a venue’s PA sound system. A mobile app for smartphones and tablets is used to control the setup and each individual mix.

TYXIT CTO, Raphaël Buache, says the devices are redefining the meaning of plug-and-play, “In seconds – literally – a band can be operational after plugging their T.ONE devices in. Available with the usual connectors used in music equipment - 1/4", 1/8", or XLR - T.ONE transmitters are capable of transmitting high-quality audio with up to 10 simultaneous streams, all with negligible latency – that is, less than 2 milliseconds.” TYXIT enables recording and mixing on the go and uses a proprietary radio protocol on 5.8 GHz ISM Band and audio codec for fast compression and high-quality audio.

Built using cast metal and other high-grade materials and designed with comfort and sturdiness in mind for touring and road trips, each plug device is engineered following the standards of Swiss engineering: attention to detail, impeccable finish and tight tolerances. Test protocols include adherence to wireless communication legal requirements, as well as drop- and resistance-tests (including IP54 waterproofness). Over 100,000 lines of code have been produced and tested to ensure the algorithms created deliver the cleanest sound in all circumstances.

TYXIT is currently creating a community of pioneers to join an upcoming beta-testing program to help refine the final stages of development. It is now running a highly-anticipated 30-day Kickstarter campaign – indeed, some 12’000 musicians have already subscribed to the email list for the announcement. The TYXIT team aims to engage directly with musicians from all walks of life through the crowd-funding campaign.

“Musicians themselves know best what they need. We’ve made sure to incorporate their feedback and insights into our development so far. At this advanced production stage. our community of pioneers will continue to be part of our product journey to make it the best it can be,” explains Bruno Constans, TYXIT Chief Musician Officer.

Earlier this year, TYXIT showcased prototypes at the CES Convention in Las Vegas, where it won a prestigious Innovation Award, and the NAMM Music Show in Anaheim. It is backed by the Swiss Confederation, the regional Vaud Office for Economic Affairs and Innovation, Venture Kick, Accelerace and HEIG-VD.

You can back the TYXIT T.ONE on their Kickstarter page now, starting at about $249 for a pair of devices for the Super Early Bird adopters. Further info can also be found on TYXIT’s website.