In ‘Teach Encourage Empower Mentor (TEEM)’ author Yolanda J. Lomax combats the isolation many women experience during their careers in the military and empowers them to band together and draw upon their bonds of sisterhood with other female service members 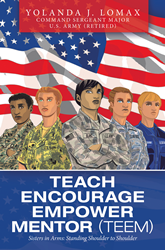 When we form the TEEM, we are well on our way to show that no weapon formed against us will prosper. When we can put aside trivial bickering and display unity, we are truly a force to be reckoned with.

In male-dominated fields such as the military, it is crucial that women have access to female mentorship so that they too can rise through the ranks, receive development opportunities, and go on to have successful, confident careers. In “Teach Encourage Empower Mentor (TEEM): Sisters in Arms: Standing Shoulder to Shoulder,” author and decorated U.S. Army veteran Yolanda J. Lomax provides a powerful leadership resource that teaches women in the Armed Forces how to build rapport and sisterhood with their fellow service members and advocate for and elevate each other as they grow professionally.

Throughout her 32-year career in the Army, Lomax longed for the mentorship of her sisters in arms. She yearned for the opportunity to seek their professional advice as well as to have another woman to go to, even if just to share a personal moment. Lomax was inspired to write “Teach Encourage Empower Mentor (TEEM)” after being tasked with creating a mentorship program for women during her last duty assignment in Korea. At that time, she was a command sergeant major of one of the battalions, and women were beginning to trickle into a previously male-dominated brigade. Ultimately, Lomax’s efforts were focused on mitigating sexual harassment and assault of female service members while also giving them leadership and development opportunities.

Early in Lomax’s career she also experienced military sexual trauma. At that time, Lomax did not feel comfortable coming forward with what had happened to her – she feared it would put an end to her future in the military. But Lomax’s experience is not unlike that of other women who have been assaulted or harassed while serving their country, and she knew that cultivating an environment with more female leadership and strengthened bonds of sisterhood would provide outlets for subordinate female service members to seek help and receive support when they need it.

“My prayer and hope is for this book to be a motivational catalyst that will encourage sisters in arms to plant seeds and watch over them as their roots take hold, emerge, and break through to reveal strong sequoia trees with branches that are ready to take on the responsibility to teach, encourage, empower and mentor – form a TEEM for our present and future military forces,” Lomax wrote in the introduction to her book. “When we form the TEEM, we are well on our way to show that no weapon formed against us will prosper. When we can put aside trivial bickering and display unity, we are truly a force to be reckoned with. We can show everyone that we are ‘average’ females, capable of achieving exceptional results.”

Ultimately, “Teach Encourage Empower Mentor (TEEM)” provides a roadmap to effective leadership through mentorship, encourages female service members to network while in-service and after separation, and reminds them that they are not alone and can and should depend upon each other.

About the author
Yolanda J. Lomax is a wife, mother, poet, praise dancer, retired command sergeants major, and sci-fi fanatic. Lomax entered the U.S. Army in 1979 as a reservist, transitioned to active duty in 1980, served 32 years in an array of stateside and overseas assignments, and earned a host of awards and decorations. Lomax earned her Master of Business Administration degree from Trident University. She and her husband, Davie, have two children, and in her free time, she seeks out any available opportunity to assist veterans. Lomax currently resides in Elgin, S.C. To learn more, please connect with the author on Facebook.