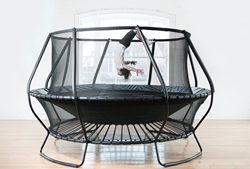 “I am passionate about the need to play outside and the positive effect it has on anyone, but especially children,” said Ed O’Brien. “So when I met the team at Plum and felt that same passion and belief from them, it was clear this was going to be an ideal partnership."

b4Adventure, an international manufacturer of backyard adventure gear and active play toys, recently partnered with UK-based Plum Play to distribute Plum Play structures and products to its large network of retail partners in the United States.

b4Adventure was founded in 2011 on the belief that outdoor play has a monumental role in the physical and mental health of young children, and they should be encouraged to not just play, but go outside and explore nature.

“I am passionate about the need to play outside and the positive effect it has on anyone, but especially children,” said Ed O’Brien, founder and owner of b4Adventure. “So when I met the team at Plum and felt that same passion and belief from them, it was clear this was going to be an ideal partnership set out to achieve the same thing – getting more kids to play outside!”

Plum Play was founded in 1988 by a husband and wife team with three children who started the company to provide kids with the tools they need to let their imaginations run wild. Plum Play now sells to more than 40 countries with a catalog of more than 150 products.

“We are always thrilled to enter a new market, but our partnership with b4Adventure is more exciting than usual because of the great synergy between our company missions,” said Philip James, Director of Sales for Plum Play.

Plum Play will be attending Toy Fair New York to support their distribution expansion into the U.S. and to debut its innovative Bowl Trampoline which will be displayed in the lobby of Javits Center throughout the show, February 22-25. To see some of the b4Adventure and Plum products, Toy Fair attendees can visit booth #5859 on the lower level.

The partnership between the two companies officially kicked off in January 2020. To learn more about the products that are now available in the U.S., you can visit plumplay.com.

About b4Adventure
b4Adventure is a manufacturer of outdoor adventure and active toys that encourage kids of all ages to get outdoors, stay active and have fun while doing it! Founded in 2011, the b4Adventure family of brands includes Slackers, American Ninja Warrior, Playzone-Fit and 4Fun, and has something to offer every level of adventurer from toddler stage all the way through to adulthood. b4Adventure operates on the belief that great things happen when kids stay active and play outdoors.

About Plum Play
Passionate about play, Plum helps to nurture curiosity and creativity by creating a safe and fun environment, allowing children the freedom to play and the parent peace of mind. With over 30 years of experience, Plum products are designed for every stage of childhood with great quality and kind to the environment. From 12 months old to teenage years and beyond, Plum will help you discover the best products for your child’s development through play, and create a childhood of great memories.