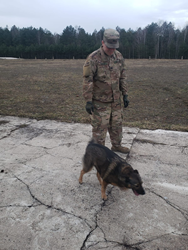 We understand how important it is that they are able to rescue these dogs for good and make them a permanent part of their family, explains Robert Misseri, president of Guardians of Rescue, an animal rescue organization.

There are parts of the world that sadly aren’t a safe place for dogs. So when American soldiers see some that have been abandoned or abused, they can’t help but to want to get involved. When they do, they form a bond with the dog, and can’t bear the thought of leaving them behind when it’s time to head back home. A soldier has reached out to Guardians of Rescue, asking for help to get his two dogs back to the U.S. from overseas, so they can live out their life with him in peace.

"We understand how important it is that they are able to rescue these dogs for good and make them a permanent part of their family,” explains Robert Misseri, president of Guardians of Rescue, an animal rescue organization. “We absolutely want to help them, and know how to make it happen, but we have to have the financial backing of the public to pull it off.”

Chief Warrant Officer Anderson has been on a mission, serving overseas for his country. Now, his country is being asked to help him with his mission of bringing his two beloved dogs home with him. As he is scheduled to head back to America, the idea of leaving the dogs behind in a foreign country is weighing heavy on his heart. He swore to both dogs that they would never be abandoned and mistreated again, and he’s counting on Guardians of Rescue to help ensure it.

The two dogs, Moose and Sergeant Mimi Morale, were found by Anderson. They were strays that were starving and had been mistreated. He rescued them, gave them the treatment they needed to nurse them back to health, named them, and then fell in love. Sergeant Mimi Morale got her name, because she has a special way of boosting the morale of everyone around, and putting a smile on everyone’s face. The two canine companions have been living in his tent and have become family.

“There’s nothing like the bond you can have with a dog, or with dogs in this case,” explained Chief Warrant Officer Anderson. “I love these dogs like family, and I can’t walk away and leave family behind over here. I will forever be grateful to be able to take them back to the U.S. so they can continue being a part of my family.”

While Guardians of Rescue has helped numerous soldiers be able to bring their adopted dogs back to the US from overseas, it’s a costly process. This July 4th, as we celebrate the nation’s independence, it would be extra special to honor those members who are on the front line securing it. Helping to bring back this soldiers dogs would be the ultimate reward, honoring why they serve in the military, which is to protect life, liberty, and the pursuit of happiness. It’s estimated that to bring both dogs back will cost around $9,000. The only way they can ensure that the soldier’s dogs can be brought back is by raising the funds that it will take to do so. To help support Guardians of Rescue, make a donation online: https://guardiansofrescue.networkforgood.com/projects/78649-bring-moose-and-mimi-to-the-us-with-their-service-hero.

Guardians of Rescue provide assistance to animals out on the streets and investigates animal cruelty cases. They are located in New York, but they help animals in many places around the country. They are also instrumental in helping military members with their pets. To learn more, get involved, or to make a donation to support the Guardians of Rescue, log onto http://www.guardiansofrescue.org.

About Guardians of Rescue
Based in New York, Guardians of Rescue is an organization whose mission is to protect the well-being of all animals. They provide aid to animals in distress, including rehabilitation, assisting other rescue groups, and providing support to families, both military and not, who need assistance due to economic factors. To learn more about Guardians of Rescue, visit the site at http://www.guardiansofrescue.org.