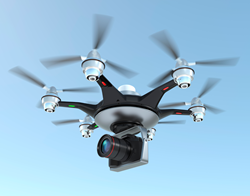 ...the new rule for business-related or "civil" drone use will most likely be released by June of this year.

What is that mechanical thing soaring above everyone's heads at the park or buzzing around the neighbor’s backyard? Recent attendees to electronics trade shows, photography expos, or camera stores have seen them for sale: drones, or Unmanned Aircraft Systems (UAS). Drones are a new, relatively affordable tool for capturing aerial photography. They are increasingly being used by photographers to capture aerial images at weddings, sporting events, film shoots, or anywhere photographers are using the latest and greatest technology available for their clients. There is also a lot of talk in the film and photography community on how it is legal to use drones for photographic purposes. Professional Photographers of America (PPA) has been working closely with the FAA to dispel myths and clarify rumors about the current legality of drone use and the importance of drone registration. Instead of seeking out the most current drone information from a variety of sources, the public can find the most updated information and blogs on the topic at PPA.com/Drones.

According to current regulations, it becomes unlawful to fly a drone the moment the images taken are used for business purposes (sold or used in promotional material). There is currently only one specific situation in which photographers are allowed to use drones for business use. The professional photographer must have a Section 333 exemption from the FAA (a complicated process which usually involves an attorney) and the drone must be operated by an FAA-licensed pilot.

PPA has been lobbying the FAA to change the current regulations, and recently had a very informative discussion in D.C. with five members of the FAA's UAS integration team. As a result, PPA can report that the new rule for business-related or “civil” drone use will most likely be released by June of this year. The FAA confirmed that they are prepared for a late spring/early summer release and that the rule will take effect 30 days after said release. These regulations will apply to drones weighing under 55 lbs. PPA also expects the new regulations to be similar to the proposal released by the FAA in 2015, which would allow for the use of drones by professional photographers if the following requirements are met:

1.    The user has obtained a small UAS airman certificate which will be earned by passing a computerized knowledge test.
2.    The user has registered all drones. The FAA's online drone registration system has recently been expanded to include registration of drones used for business-related purposes.
3.    The user follows all of the restrictions on maximum height, maximum speed, airspace etc. Based on the proposal, PPA expects the restrictions to be very reasonable.

There is a lot of exciting progress coming very soon that will allow professional photographers to use drones in their business, but for now, the moment drone images are sold or used to promote a business, they are most likely operating outside of legal regulations. And if caught, the photographer could face very significant fines.

Drones use for hobbyists and taking images for image-capturing's sake is legal. However, hobbyist drones must still be registered regardless of pro-status, or the purpose of the images. Drone owners can easily register their drones at RegisterMyUAS.FAA.gov or by using the B4UFLY app. PPA has provided a quick and handy guide on how this easy registration process works and encourages photographers to keep honing their aerial photography skills, so when the FAA changes their rules, they will be ready to include drone use in their business model. As more changes are expected in the coming weeks and months, PPA will continue to keep its members updated on the new rules and regulations regarding drone use through PPA.com/Drones and connected via a Drone “community” on their social networking site, theLoop.PPA.com. Consider joining PPA today at PPA.com/Join to remain up-to-date on drones, copyright and many other issues vital to today’s photographers.