On Saturday, November 20th, 2021, the UC Bearcats Senior Day game will feature a patriotic opening ceremony performance by Team Fastrax™. The Bearcats are going into the game with a 10-0 record after a momentous win against South Florida. 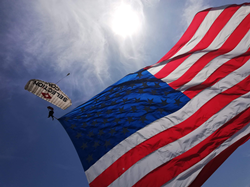 Saturday, November 20th, 2021, at 3:30pm the University of Cincinnati Bearcats will face off against the SMU Mustangs for Senior Day and the last home game of the season. Their undefeated season has created shock waves across the U.S. The No. 2 ranked Cincinnati football team will look to move to 11-0 just the second time ever and clinch a spot in the American Athletic Conference Championship Game. Team Fastrax™ will help make the Senior Day game night unforgettable with their fan favorite, American Flag demonstration jump. As the National Anthem plays, a member of Team Fastrax™ will jump in with their majestic 1,800 sq. ft. American Flag. The patriotic skydive will be displayed on the scoreboard with the team’s live air-to-ground video feed, so spectators from all sections at Nippert Stadium can take in every breathtaking moment of the performance.

“We are thrilled to be just a small part of the action the fans will get to see today.” commented John Hart, owner of Start Skydiving, and Founder of Team Fastrax™. The Bearcats have had such an outstanding season, and we are so thankful we were able to be here for every home game win. Go Bearcats!”

According to the Bearcats website, the Bearcats will celebrate Senior Day and honor 32 seniors before the game. UC and SMU will meet for the sixth-time ever with Cincinnati holding a 4-1 advantage. The Mustangs (41.6 ppg) and Bearcats (39.2 ppg) will match the AAC's top two scoring offenses and also the league's top scoring team (SMU) with the top scoring defense (Cincinnati, 16.2 ppg). Senior QB Desmond Ridder passed for a season-high 304 yards and two touchdowns to go along with 72 rushing yards and another score in a 45-28 win at USF on Friday night. Ridder set the UC career touchdown pass mark against the Bulls, finding TE Josh Whyle for a 21-yard score to start the third quarter. CB Ahmad "Sauce" Gardner made his third interception of the season and also had a strip sack against the Bulls. Ridder is a semifinalist for the Maxwell, Walter Camp and Davey O'Brien Awards, and a candidate for the Heisman Trophy. Gardner and senior CB Coby Bryant are semifinalists for the Jim Thorpe Award. Gardner is also a semifinalist for the Bednarik Award and senior LB Darrian Beavers is a semifinalist for the Butkus Award.

For more information on the game or for tickets, visit the UC Bearcats website.

Team Fastrax™ dedicates every performance to a fallen hero. They may be gone but are never forgotten. This performance by Team Fastrax™ is dedicated Chief Warrant Officer 2 Kirk Fuchigami Jr., who Died November 20, 2019, serving during Operation Freedom’s Sentinel. For more information on Chief Warrant Officer 2 Kirk Fuchigami Jr. visit the Military Times website.