UFO Researcher Updates His Book, ‘From Adam to Omega,’ to Reflect New Knowledge From Government Officials

Author A.R. Roberts publishes ‘From Adam to Omega: An Anatomy Of UFO Phenomena (Revised and Updated)’ to provide up-to-date information regarding UFO sightings on Earth 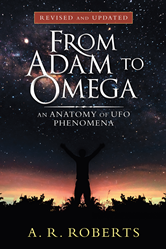 "As a fan of ufology, this book was savored by me as I paged a rather lengthy recap of virtually every topic of the alien encounters’ history, past and present, as well as most interestingly his future predictions."

After 23 years of in-depth UFO and alien research that initiated due to a personal sighting, author A.R. Roberts complied the information he gathered into a comprehensive book. Roberts recently published “From Adam to Omega: An Anatomy Of UFO Phenomena (Revised and Updated),” which updates his research from the 2012 edition of the book to incorporate new information that has been obtained through whistleblowers and high-ranking officials.

When Roberts was younger, he lived in a town that had many interesting phenomena occurring at a local Air Force base. One night, Roberts had a personal up-close experience with a UFO after venturing into the forest with local newscasters. They all saw a huge, white oval-shaped craft that was emitting sparks. This object disappeared from their physical view in about five seconds, but the image is still burned into Roberts’ brain. This sighting inspired him to conduct his own research 33 years later, which is presented in “From Adam to Omega.”

“With over 500 research citations, I have provided substantial evidence that connects the dots regarding an alien agenda that began thousands of years ago,” said Roberts. “I hope to inform readers about this evidence to showcase how these beings could be furthering the development of humankind, which impacts their day-to-day life.”

“From Adam to Omega” looks at human vs. alien interaction in the past and present, including reference to how events have occurred even back in the biblical era. Roberts presents various stories from the Bible and looks at them through an investigative lens, including scientific research and evidence associated with alien interaction that could have occurred in biblical stories.

“As a fan of ufology, this book was savored by me as I paged a rather lengthy recap of virtually every topic of the alien encounters’ history, past and present, as well as most interestingly his future predictions,” said Beth Adams on Pacific Book Review. “Author Roberts doesn’t succumb to any quick and emotional conclusion, yet he doesn’t shy away from letting his expert beliefs go unsaid.”

This book ends with information regarding preparation for Omega. Roberts provides various messages and warning signs that have surfaced regarding an end to society as it is currently perceived. He discusses how, soon, the world will wake up to the reality of life on other planets.

Overall, Roberts encourages readers to take the facts presented within this book and use their own judgment to come up with a conclusion. He believes that with the substantial evidence he has provided, that readers might begin to reevaluate their own beliefs and change the way they view the world… and beyond.

About the author
A.R. Roberts was a musician since his teenage years and found himself following this passion and turning it into a career. He began playing clubs around the country, including an appearance in the Ed Sullivan show back in December 1964. In addition to his love of music, he has a fascination with UFOs and aliens that was sparked when he was a young teenager. He lived near an Air Force base where odd things happened on a regular basis. He, along with a few local newscasters, saw a UFO with his own eyes and the sight of that object has remained in his mind. 33 years later, Roberts then began his 23 year-long research that he compiled in “From Adam to Omega.” After retiring as a musician, he found himself diving into his photography and UFO research—which has produced a total of three books. Currently, he resides in Lake Worth, Florida. To connect with Roberts, please visit his author website: http://www.arroberts.net/.