Ultimate Advocate for Babies and Anathema to Pro-Abortion Politicians, Passes Away at Age 83 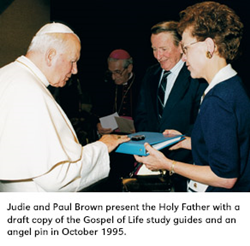 Paul Brown was the man with the vision…the driving force providing the oxygen that makes American Life League’s work possible.

Husband, father, grandfather, and pro-life hero, Paul Brown passed away on November 4, 2021, with his family by his side. “Paul was the man with the vision…the driving force providing the oxygen that makes American Life League’s work possible,” stated Jim Sedlak, Executive Director of American Life League, “He was the ultimate advocate for babies.”

Paul Brown was a heroic leader in the pro-life movement, diving into the political arena in the mid-1970s. A cofounder of the nation’s first national pro-life political action committee, Life Amendment Political Action Committee, Brown’s group targeted pro-abortion legislators, and in the 1980 election helped bring about the solid defeat of Senators George McGovern (SD), Senator Birch Bayh (IN), and Senator John Durkin (NH).

As the pro-life movement’s number one political strategist, Brown led the way for a proliferation of life advocacy political action committees. He then moved on to apply his skills to fundraising for the American Life League and helping to grow the organization.

Over the years, Brown applied his skills and knowledge to the marketing and technical development of the American Life League and continued to find unique ways to showcase pro-life work and fight against pro-abortion politicians, particularly those who claimed to be Catholic but advocated for abortion like Ted Kennedy.

The American Life League is mourning the death of Brown, husband of President and Cofounder Judie Brown, father of Executive Vice President Hugh Brown, and grandfather of Katie Brown, Director of the league’s Marian Blue Wave project. The organization, established in 1979, viewed Paul Brown as a visionary pioneer in the fight to preserve every human being’s life in the face of legalized abortion and a “culture of death.”

Brown’s colleagues have described him as “a man who never met a problem or a challenge he would not face head on and overcome by sheer wit, and sometimes real grit!”

Paul’s wife, Judie Brown, described him as a “remarkable man who had an immense heart, a very wise perspective, and the intellect of a titan.”

Judie noted that for many, Paul could have been defined as the “unknown pro-lifer,” but for her, she declared, Paul was “the wind beneath my wings.”

The Browns were married for 53 years. Paul is survived by his wife Judie, three children, and twelve living grandchildren.