With a new grant from the United States Department of Agriculture's National Institute of Food and Agriculture (USDA-NIFA), University of Maryland (UMD) researchers will take a big data approach to finding genes that may confer mastitis and other cattle disease resistance by partnering with the dairy industry to improve animal welfare through genomic selection. 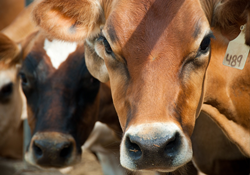 “If we can use this large dataset to identify genes related to disease resistance, when a producer selects a cow for breeding, they can use information about health and not just focus on milk production. This can create animals that are not only high producers, but also resistant,” says Ma.

With consumer trends moving towards antibiotic-free animal agriculture, selecting for livestock that is disease resistant has become particularly important for animal welfare, as well as for production. To address this need the University of Maryland (UMD) was recently awarded a grant from the United States Department of Agriculture National Institute of Food and Agriculture (USDA-NIFA) to analyze millions of records maintained by the Council on Dairy Cattle Breeding (CDCB) with the goal of identifying genes and underlying mechanisms for disease resistance in dairy cattle. Mastitis and other cattle diseases not only present a concern for animal welfare, but cost the dairy industry $230 million every year. With this new unique partnership between UMD, the dairy industry, and USDA-NIFA, researchers will be able to capitalize on the wealth of industry data available to make strides in the genetic understanding and ultimate prevention of cattle diseases that haven't been feasible with smaller datasets.

“With this project, we are generating some knowledge about what genes are related to mastitis and other dairy cattle diseases, as well as providing a model that predicts which animals are more resistant to the disease,” explains, Li Ma, associate professor in Animal & Avian Sciences at UMD and lead investigator on this grant. “If we can use this large dataset to extract health traits and identify genes related to disease resistance, when a producer selects a sire or a cow for breeding, they can use information about health and not just focus on milk production and yield. This can create animals that are not only high producers, but also disease resistant.”

According to Ma and the CDCB, during the last 50 years, milk production from dairy animals in the United States has more than doubled by following traditional breeding paradigms, skyrocketing even more recently with the introduction of genomic selection in 2009. Based on the DNA of dairy cattle, producers have been able to select for animals that will produce the most milk, naturally enhancing breeding practices and greatly improving production in the industry.

Collaborating with industry through the CDCB with co-investigator Kristian Parker Gaddis is a “win-win” for industry, academia, and future research says Ma. Huge volumes of data have been generated for production purposes, but can be used for much more.

“This big database maintained by CDCB is an industry-supported database where they upload data on the cow’s performance, reproduction, disease records, anything that is important to the value of that cow. They send in a DNA sample to get a sense of the value of the cow, and all of those records - over 2 million cows and 10s of millions of performance records - are maintained in this industry database. Data is already generated by industry and sitting there waiting for analysis. Now that the data is available, we can do more research and application for the industry and for animal welfare.”

Impacts of this work will most directly benefit the dairy industry and welfare of their cattle, explains Ma, as it will help producers select animals that are the most disease resistant. From a research perspective, however, there are many additional opportunities.

“People may also be interested in knowing which genes are related to the disease, which mutations, or which versions of the gene are causing more disease and less disease,” says Ma. “So people may also do some molecular biology functional studies, and this information will help to drive future research. For example, if there is a big genetic target identified from this project, researchers can use genome editing to help cure or correct the disease in question, and inform future research methods or breeding practices. A better understanding of the disease itself and its underlying mechanisms is always important in fighting disease in the long run.”

With this grant, Ma will be looking at dairy cattle diseases as a whole, but with a particular emphasis on mastitis. Mastitis, according to Ma, is the most costly disease for the dairy industry. It is a bacterial infection that causes inflammation in the udder during the milking period and requires antibiotic treatment to heal. A disease like this can only be studied from a genetic perspective with a very large dataset since it is mostly caused by an environmental pathogen, explains Ma.

“Mastitis is caused by a bacterial infection, so it is a very complicated disease to study with genomics. Because it is a complicated disease genetically, you need a large dataset to have the power to see the true signal. Previous genetic studies haven’t had the power because of limited sample sizes. But with this database from industry and millions of records, we are now in a good position to study the genetic component and see how we can help prevent this disease and avoid the use of antibiotics whenever possible.”

Ma adds, “Using a genomics approach, we are trying to enhance the ability of the animal to protect itself from the disease. This will not only reduce the incidence of mastitis, but also the use of antibiotics, so long-term the benefit is higher for the animal’s welfare, from an environmental perspective, and on the production side. This is a win for everybody involved.”

This work is funded by the United States Department of Agriculture National Institute of Food and Agriculture (USDA-NIFA), Award #2020-67015-31398.