Models provide an opportunity to study how pathogens move in and out of the blood like never before, with implications for soldier and civilian health. 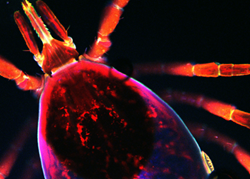 “Right now, there is absolutely no effective model to study this process,” says Pal, “so these 3-D models are essential.”

Utpal Pal, professor in Veterinary Medicine at the University of Maryland, is serving as one of three collaborators on a new innovative grant from the Department of Defense, using 3-D bioengineered models of human blood vessels for the first time to examine how tick-borne pathogens move in and out of blood and tissue to cause infection and diseases like Lyme and Anaplasmosis. The team is combining expertise in tick-borne infectious diseases and bioengineering to study mechanisms that cannot be adequately captured using animal models, thus providing new targets for vaccine development and therapeutic options to protect our troops and civilians alike.

Pal is partnering with principal investigator Dr. John Dumler at the Uniformed Services University and co-investigator Peter Searson at John Hopkins University. “The story starts out with the reports that came out of the Centers for Disease Control and Prevention and the National Institutes of Health documenting the substantial increases in tick-borne diseases in the United States since 2004, and there is evidence that many are growing even faster than reported,” says Dumler.

Between 2004 and 2016, there was a reported four-fold increase in recorded tick-borne diseases, with 80% of vector-borne diseases that affect Americans actually being tick-borne and not mosquito carried. This phenomenon affects everyone in areas where ticks are prevalent, but our troops are disproportionately affected due to their frequent travel across the country and outdoor training exercises. Due to this upswing in tick-borne illness in soldiers and civilians, the United States Department of Defense started the Tick-Borne Disease Research Program as part of their Congressionally Directed Medical Research Program, charged with supporting research in tick-borne illness.

The Borrelia burgdorferi pathogen that causes Lyme disease and the Anaplasma phagocytophilum pathogen that causes Anaplasmosis are two prominent pathogens carried by a common tick in the United States, the Ixodes scapularis or black-legged tick (deer tick). Dumler is an expert in Anaplasma and has been working in tick-borne infection for forty years, while Pal is a world-renowned expert in Borrelia. Both Anaplasma and Borrelia, however, have many unknowns in their infection processes, specifically in determining how pathogens move from the skin to the blood and then from the blood to their target tissues and organs like the brain. These processes are profoundly distinct for each organism as each feature different lifestyles, but it is nearly impossible to do this work effectively in animal models.

“Humans, as incidental hosts, are a big part of the disease process in the life cycle of Borrelia,” says Pal. “How the pathogen enters the vasculature is a critical event because the pathogen is still only present in a small number. And you can’t study this using animal models. Human tissues are too different, and Borrelia can’t cross the blood-brain barrier in rodent models the way it can in humans. Dr. Searson’s models allow us to study these molecular events in a human model for the first time.”

Searson is quite well known for developing tissue-engineered models of human blood vessels and systems, particularly for the brain. With recent advances in stem cell technology, these models have become increasingly complex, with the ability to differentiate cells in a way that couldn’t be done before. While 2-D models have been used in the past to examine pathogen dissemination, this is the first time that 3-D vascular structures have been used in tick-borne infection to study how pathogens are transported by the blood and vascular system in real time, and how they can enter organs and tissues like the brain.

“Right now, there is absolutely no effective model to study this process,” says Pal, “so these 3-D models are essential.” Dumler adds, “Being able to study pathogen dissemination in a configuration that mimics what happens in a real tissue will give a much better picture about what happens in real life.”

The researchers are able to visualize this process in real time, tracking pathogens with fluorescent dyes that are easily viewed under the microscope and recorded for processing and analysis. With Searson’s expertise in creating tissue-engineered models, and Pal and Dumler’s extensive expertise in the biology of tick-borne infections, they are able to manipulate the models with different types of cells and structures to visualize how transfer in and out of the bloodstream occurs.

Everyone involved is excited about the collaboration and the future of this work. “This is a fantastic opportunity to collaborate with world experts in tick-borne infections on such an important problem,” says Searson.

Pal adds, “This grant is just the beginning to create a unique program that will use these models to help us to address many questions in tick-borne diseases that are unanswered.”