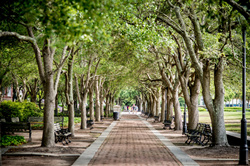 Naomi Sachs, UMD, “We would love to identify specific guidelines for parks and green space, ‘This is what you have to have to reduce or prevent violence, these are the design interventions, and these are the types of activities that you should encourage.’ That helps identify policies and funding.”

In addition to green space having measurable effects on mental and physical health, a recent collaborative study out of UMD, Cornell University, and the University of Virginia (UVA) found that well designed and maintained green spaces can potentially reduce gun violence and violent crime, making communities and cities safer and healthier. Alternatively, green spaces and parks that aren’t designed with safety in mind or aren’t well maintained can actually have the opposite effect. In a time of high stress for the country, and amid national concerns about violent crime and gun violence, these findings in the International Journal of Environmental Research and Public Health have clear implications for public health and policy, as well as the future of urban planning and development.

“There is an understanding that the physical environment has measurable effects on people in all sorts of ways, and given the state of the country, our research team felt it was a good time to look at how outdoor spaces might have an effect on issues like gun violence and violent crime,” says Naomi Sachs, assistant professor of Landscape Architecture at UMD.

“I was drawn to the topic in response to the amount of violence, particularly gun violence, in this country, and I tried to figure out what I could do as an architect and researcher to improve outcomes in this area,” adds Mardelle Shepley from Cornell University.

In their comprehensive review of the work on green space and violent crime, the researchers compiled evidence from across 45 different studies and found that green space is in fact linked to less violent crime like gun violence, assault, murder, and theft in urban areas, but only when the green space is well maintained and designed.

“We found that green space is connected to reductions in violent crime, but now we need to better understand the mechanisms,” says Sachs. “Design is really important, both physically and for policy and programming. So using techniques like lighting, trash cans, proper maintenance, clear visibility, clear boundaries, and other CPTED [Crime Prevention through Environmental Design] tenets that people have found to be successful in parks and other public green spaces is very valuable.”

Researchers specifically chose to look at the distribution of green space in urban environments, and not only at parks because of the variability in what constitutes a park. Some parks are mostly paved and offer little to no green space, whereas open green spaces may not be established parks. How well a park is maintained plays a key role in its safety, as well as a sense of civic pride. “You feel more taken care of by your community when green space is well maintained, and you are potentially more likely to take care of the neighborhood in turn,” says Sachs.

Sachs adds, “There is a huge amount of inequity when it comes to the distribution of parks in this country. And parks need to be not just parks, but healthy, well-maintained parks with many different types and levels of engagement, including nature engagement.”

Other issues like pollution come into play when looking at health inequalities across richer and poorer communities. For example, lead and other sources of pollution have been clearly linked with increases in aggression, which can play an additional role in understanding violent crime and the development of green space, where significant lead abatement must take place on a consistent basis to build and maintain a park.

“While it would be lovely to say ‘Yes, green space prevents crime,’ it is more nuanced than that,” says Sachs. “And that is the big challenge, to figure out what the implications are for future design, and identify the gaps in the literature to help inform future policy.”

“How to control violent crime is a polarizing issue,” adds Hessam Sadatsafavi of the UVA School of Medicine. “We are interested to see, as designers whose work is to shape the physical environment, if it’s possible for us to contribute to this conversation and to take some actions to see if we, personally, can contribute to reducing crime.”

The researchers on this team strongly contend that sound science is integral in helping achieve these goals and showing policy makers the importance of maintaining green space.

“I’ve trained myself to be a researcher in addition to a practitioner because science is what gets things done with policy makers and helps make your case,” says Shepley. “Most people agree now that nature is therapeutic, but we’ve had to bring hard data to the table so that people will fund gardens for children, at hospitals, in cities, and elsewhere. If you don’t have the science behind it, people won’t take it seriously. This paper gives sound scientific evidence that green space is not only good for mental health, but for reducing violent crime and even reducing costs, since crime is expensive for cities.”

Sachs adds, “We would love to identify and come up with specific guidelines for parks and green space so that we could give cities a toolkit and say, ‘This is what you have to have in order to reduce or prevent violence, these are the design interventions, and these are the types of activities that you should encourage in areas of green space.’ That helps identify policies and where funding should go.”

The team plans to take this work a step further and conduct a meta-analysis of the literature, partnering with the United States Department of Agriculture Forest Service. The researchers also identify the need for more qualitative studies to get at underlying causes, as well as more causal interventions to further investigate the mechanisms behind why and how green space can help reduce violent crime.

This paper entitled, “The Impact of Green Space on Violent Crime in Urban Environments: An Evidence Synthesis,” is published in the International Journal of Environmental Research and Public Health, DOI: 10.3390/ijerph16245119.