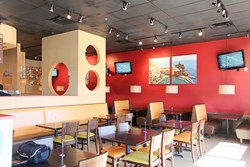 Americans are embracing the newest concept in fast casual dining – homemade pizza custom made just for you, and ready to eat in six minutes,” said Andrew. “Though imitators are entering the market, our customers and franchisees are choosing the original.

The original fast casual pizza franchise, Uncle Maddio’s Pizza Joint, continues expanding across the country with the with the recent signing of a five-unit franchise development agreement for Southeast Alabama. The chain, founded by Matt Andrew, former President and co-founder of Moe’s Southwest Grill, is the fastest-growing chain in the category it created -- fast casual pizza.

Led by owner operator, and Troy, Ala., native Michael DiChiara and several partners, including Auburn University graduates and Auburn, Ala., residents Ernest Lee, Jr. and Clint Wilson, along with Will Hudson, also from Troy, Ala., the new Uncle Maddio’s franchisees bring a combination of restaurant, legal, real estate and construction experience. Hudson is a multi-unit owner of restaurants in Alabama, while Wilson is an attorney with McCollum and Wilson, P.C. Lee‘s company Colvin Evans Construction is building the five Uncle Maddio’s units. The first of five locations is set to open early in the first quarter of 2014 in the new ‘Heart of Auburn’ complex on Auburn University’s campus.

“Americans are embracing the newest concept in fast casual dining – homemade pizza custom made just for you, and ready to eat in six minutes,” said Andrew. “Though imitators are entering the market, our customers and franchisees are choosing the original. Every day, we are fielding more and more calls from prospective franchisees around the country.”

Launched in Atlanta in 2008, Uncle Maddio’s operates 18 restaurants with 11 new units opened this year, and 35 units anticipated to open in 2014. A top franchise, Uncle Maddio’s now has 165 restaurants in development, including numerous franchisees opening their second and third locations.

“The fact that our franchisees are rapidly building out multiple locations is the highest praise,” said Andrew. “This is a concept that delivers on its promise and provides customers with a wholly unique dining experience.”

In addition to made-from-scratch dough, Uncle Maddio’s makes its own sauce, meatballs and salad dressings to ensure the highest quality and freshest selection. With more than 5-million pizza creation options, customers can choose from three dough choices, including a gluten-free, six different sauces and more than 48 toppings, with vegan and organic selections available. Every pizza is custom made and baked in less than six minutes, starting at $6.99.

“We spent several months researching the build-your-own pizza concept that Uncle Maddio’s pioneered,” said Michael DiChiara of the Southeast Alabama franchisee. “The pizza is second to none, utilizing the highest quality ingredients, and the strength of the brand catapults Uncle Maddio’s above all competitors. Matt and his team have the experience and leadership skills for ultimate success. They have created a truly original concept that is operationally sound and profitable. A homerun for any prospective franchisee.”

The menu also features create-your-own salads with a vast buffet of crisp garden-fresh vegetables, as well as a pre-imagined menu full of signature salads such as Greek, Chicken Caesar, and Santa Fe. Toasted panini sandwiches, including choice creations such as Maddio’s Steak and Cheese, Basil Chicken, Tuscan Meatball, Turkey Bacon Cheddar and more.

Maddio Meals at Uncle Maddio's Come with 6" Pizza and Choice of Side Salad or Bowl of Soup and a Drink.

Only the freshest ingredients go into your pizza at Uncle Maddio's.Uncle Maddio's make your own pizza topping choices.