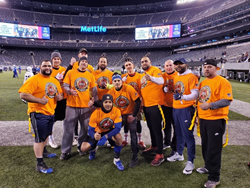 The Snow Bowl allows for self-formed teams that raise at least $2,400 to play a minimum of three 6-on-6 flag football games played on the turf of MetLife Stadium (home of NY Football Giants and NY Jets) in East Rutherford, New Jersey.

While the carpenters formed an enthusiastic team, behind the scenes they provided even more support.

“I have to give kudos to the carpenters for helping us move boxes of supplies in and out from trucks,” said Diane Paraskevas, senior director of Corporate Development, Special Olympics New Jersey. After an initial request for assistance on Thursday before the event, she acknowledges needing help on Friday, Saturday and Sunday morning at 5:45 am. “The carpenters showed up and were ready to help,” said Paraskevas. “I remember trying to move a box, and a carpenter stopped me almost immediately. He said, ‘Don’t touch that, I’ll take care of it,’ which demonstrates the attitude of the effort and their support for Special Olympics New Jersey.”

The goal of the Snow Bowl was to raise $600,000. To date they are at over $505,000 and still entering donations.
Special Olympics New Jersey provides year-round sports training and athletic competition in 24 Olympic-type sports for more than 26,000 children and adults of intellectual disabilities at no cost.

In February, union carpenters, who made the minimum plunge pledge of $125, took the dip into the icy Atlantic Ocean during the Special Olympics Polar Bear Plunge annual fundraiser. It is the largest fundraising event of the year for Special Olympics New Jersey, with a goal of $2 million. When asked the reaction of the carpenters team that ran into the icy water, Gowing said the carpenters replied through chattering teeth that the water “was freezing.”

“Special Olympics New Jersey is an exceptional organization helping individuals with special challenges,” said Gowing. “It’s in the carpenters’ tradition to help our neighbors when the call comes to support and participate in such worthy events. That’s the spirit we hope to display in these volunteer efforts, and I can’t think of a more worthwhile cause than Special Olympics New Jersey.”