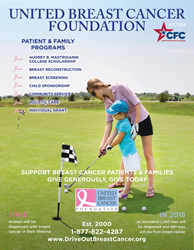 UBCF’s PSA highlights a sweet image of a mother teaching her child how to play golf, shares educational facts about male and female breast cancer as well as UBCF’s Programs.

The Official 100th PGA Championship Commemorative Souvenir Program features UBCF’s print Public Service Announcement (PSA) on page 141. UBCF’s PSA highlights a sweet image of a mother teaching her child how to play golf, shares educational facts about male and female breast cancer as well as UBCF’s Program s. The PSA encourages PGA fans to get involved and support Breast Cancer Patients & Families. The Official 100th PGA Championship Commemorative Souvenir Program was sold at Bellerive Country Club during all rounds of the PGA Championship. In addition, the publication was available Nationwide at major newsstands and retailers at a cover cost of $10. National exposure with pass-along readership is estimated at over 500,000!

Amazingly enough, Brooks Koepka was successful at holding off Tiger Woods this past Sunday, while Tiger was able to put together one of his best comeback rounds of golf since his off-and-on return to competitive form in the PGA. Tiger was in form like days of the past with his back nine run up the board - it was close, so close. Tiger even gave his famous Winning Right Fist Pump for his second-place finish after one of the best rounds of golf from Tiger Woods in some time.

UBCF’s Executive Director, Ms. Stephanie Mastroianni shared, “UBCF is honored to be a featured charity at the 100th PGA Championship. It’s so important that we raise awareness of breast cancer for both women and men – we’re here for those in need. UBCF extends congratulations to Brooks Koepka on his impressive win and congratulations to Tiger Woods on his unforgettable return to the green.”

Background on UBCF
UBCF is committed to offering breast health and wellness services focused on cancer prevention, screening, treatment and overall wellness. UBCF’s mission is to make a positive difference in the lives of those affected by breast cancer and carries it out through seven life-supporting patient and family programs available to women, men and families nation-wide. UBCF never denies services to anyone regardless of age, race, gender, ethnicity, income or medical insurance coverage. Those in need of breast health services may visit ubcf.org or call toll-free, 877-822-4287. Tax-deductible contributions may be made towards UBCF’s programs. UBCF accepts vehicle and property donations as well. Contributions may be mailed to UBCF, P.O. Box 2421, Huntington, NY 11743, or donate through the Combined Federal Campaign, #77934.