UCCR will attend the national gatherings of both the United Church of Christ and the Christian Church (Disciples of Christ) for vital conversations on how denominational camp and retreat properties might be saved from the selling block. 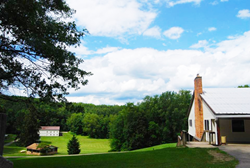 “As church membership declines in the U.S., we are seeing many denominations facing equally declining participation in camp programs and financial resources that have historically helped support camp & retreat facilities,” says Rev. Tina Heck, Director of Reservations & Communications at UCCR.

UCCR has managed camp and retreat properties, the majority of which have been church owned, since 1970.

UCCR will attend the General Synod of the United Church of Christ in Milwaukee, WI, June 21-25, and the General Assembly of the Christian Church (Disciples of Christ), July 20-24 in Des Moines, IA.

“While we cannot promise that every camp or retreat property is a perfect match for us, we have been able to step in and relieve judicatory offices and volunteers of the primary responsibilities of staffing, marketing, maintenance, food service, administration, reservations, and contracts. Those are aspects that require a large amount of administrative time. Many church conferences and regions simply don’t have that kind of staffing any longer,” says Rev. Heck.

The UCCR staff that will be present at these events are hopeful that regional and conference leaders and decision-makers will join them in discussions about the health and sustainability of their camp and retreat properties. UCCR CEO Mike Carr and UCCR COO Kent Shelby will attend the UCC Synod in June. Heck will attend the General Assembly in July.

UCCR manages 15 camp and retreat properties across the USA. Visit them on the web for more information.