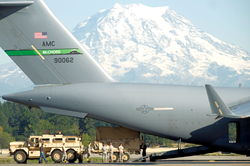 °CRYO ARCTIC™ is the coldest and most effective whole body chamber on the market.

°CRYO Science™ in partnership with Canopy Environmental is proud to announce that the United State Air Force's special tactical unit has incorporated the °CRYO Arctic™ Whole Body Cryotherapy Chamber into their squadron at Joint Base Lewis-McChord, Washington. This is the first time the Air Force has included cryotherapy in the pursuit of the peak performance and well-being of their Air Force personnel.

“It is an honor to work with some of the America’ most elite servicemen and women. °CRYO stands for the highest standards when it comes to quality, comfort and safety and we are continuously iterating on our products to deliver only the best for our clients", says Amir Amirsadeghi, CEO of °CRYO North America. "We want to inspire people to live their best and most powerful lives, and The United States Air Force is a shining example of both of these things.”

The °CRYO ARCTIC™ is the coldest and most effective whole body chamber on the market. °CRYO Science™ is the only company to have innovated in cryotherapy solution over the last 30 years, creating a patented system combining performance and safety. Reaching temperatures of -140ºC / -220ºF the °CRYO ARCTIC™ is the only machine that accurately measures the chambers temperature to deliver the most effective treatment to the user. With °CRYO ARCTIC™, the user never comes into contact with cryogenic gases and is exposed to breathable atmosphere using a patented heat exchange technology, making it the safest product on the market.