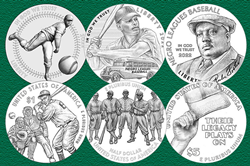 $1 Silver Coin Obverse
Designer: Matt Swaim
Medallic Artist: Eric David Custer
The design depicts a pitcher in mid-throw with the baseball in the foreground and baseball stitching as a border. Inscriptions are “IN GOD WE TRUST,” “2022,” and “LIBERTY.”

$1 Silver Coin Reverse
Designer: Don Everhart
Medallic Artist: Craig A. Campbell
The design depicts a player’s eye view of a pitch being delivered to the catcher at the plate. Inscriptions are “UNITED STATES OF AMERICA,” “$1,” and “E PLURIBUS UNUM.”

Half Dollar Clad Coin Obverse
Designer: Chris Costello
Medallic Artist: John P. McGraw
The design depicts a Negro Leagues tour bus that served as their home on the road when players were refused entry to hotels and restaurants. The batter exemplifies the determination to play the game he loves, regardless of challenging circumstances. Inscriptions are “IN GOD WE TRUST,” “LIBERTY,” “2022,” and “NEGRO LEAGUES BASEBALL.”

All coin images are available at https://www.usmint.gov/news/image-library/commemoratives.

The on-sale date for products in the Negro Leagues Baseball Commemorative Coin Program will be published on the Mint’s Product Schedule. When available, the Mint will accept orders at catalog.usmint.gov/.