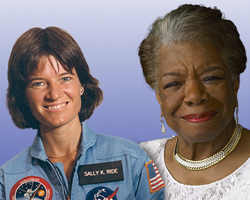 The United States Mint (Mint) is pleased to announce the names of the first two women to be honored on coins issued under the American Women Quarters Program. Famed writer Maya Angelou and trailblazing astronaut Dr. Sally Ride will be the first distinguished American women celebrated on the reverse of the program’s circulating quarters.

As authorized by Public Law 116-330—the Circulating Collectible Coin Redesign Act of 2020—the Mint will issue circulating and numismatic quarter-dollar coins with reverse (tails) designs emblematic of the accomplishments and contributions of a prominent American woman beginning in January 2022. Contributions may come from a wide spectrum of fields including, but not limited to, suffrage, civil rights, abolition, government, humanities, science, space, and the arts. The women honored will come from ethnically, racially, and geographically diverse backgrounds. As the Public Law requires that no living person be featured in the coin designs, all of the women honored must be deceased. The Mint will annually issue up to five different reverse designs over the four-year period beginning in 2022 and continuing through 2025.

The obverse (heads) of coins in this program will continue to feature a likeness of George Washington designed in a manner to distinguish it from the current image.

The public is invited to submit recommendations for women to be honored via the following web portal established by the National Women’s History Museum: https://forms.gle/3BgR3BLbFfJ69XdYA.

In accordance with the Public Law, the Secretary of the Treasury selects the women to be honored following consultation with the Smithsonian Institution’s American Women’s History Initiative, the National Women’s History Museum, and the Congressional Bipartisan Women’s Caucus.

The Mint will announce additional information about the American Women Quarters Program in the coming months.