New program includes four products with designs that tell the story of the Mayflower’s historic voyage. 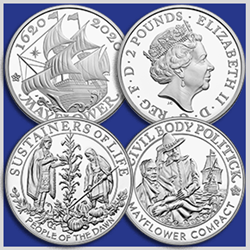 The United States Mint (Mint) today announced the Mayflower 400th Anniversary products it will offer, including some in collaboration with The Royal Mint (UK). The products are expected to be available later this fall.

The coin and medal designs come together to tell the story of the Mayflower’s historic voyage, the Pilgrims, and the impact the Pilgrims’ arrival had on the native Wampanoag people.

The four products in the United States Mint’s product portfolio include:

Limits on each of these product options will be available on the product pages this fall.

The United States Mint coins and medals, and the reverse of the UK coins, were all designed by United States Mint Artistic Infusion Program designer Chris Costello, who used multiple stylistic elements to tie the series together. These include the choice of font and North Star on the U.K. coin, which connects to the image of the sun in the U.S. coin, symbolizing a new day. That symbolism is also a reference to the Wampanoag people who inhabited the region, and were known as the "People of the Dawn."

The U.S $10 Gold Coin obverse depicts a Wampanoag family watching from the border of the design as the Mayflower arrives from foreign shores. A young boy steps on the border, representing the intersection of the Wampanoag people in their Patuxet homeland and the Mayflower passengers. Inscriptions are "E PLURIBUS UNUM," "PATUXET," and "$10."

The U.S. $10 gold coin reverse depicts portraits of a Pilgrim man and woman, representing the beginnings of a transition from monarchy to democracy. The dual portraits symbolize a democratic organization, with their resolute expressions focused on a self-determined future. A pair of mayflower blossoms flank the design. Inscriptions are “1620,” “PLYMOUTH,” “2020," "IN GOD WE TRUST," "UNITED STATES of AMERICA," and "AU 24K 1/4 OZ."

As with all UK currency, the obverse of the 24-karat gold coin and the .999 £2 silver coin from The Royal Mint (UK) feature the effigy of Her Majesty Queen Elizabeth II, designed by Jody Clark. Costello’s reverse design on these coins depicts the Mayflower bursting out of the frame as it sails through the rough seas.

The silver medal obverse features a Mayflower family bracing against the cold and windy weather, foreshadowing their coming hardships, while the ship is anchored in the harbor. A pair of mayflower blossoms flank the design. Inscriptions are "A CIVIL BODY POLITICK," "1620- 2020," and "MAYFLOWER COMPACT."

The silver medal reverse depicts a Wampanoag man and woman employing a planting technique used to grow several crops that were staples for the Wampanoag people. This method helped keep the soil healthy, maintaining the resources for annual plantings and successful harvests. The inscription "SUSTAINERS OF LIFE" recalls not only this sustainable planting technique, but also the critical skills the Wampanoag people afforded to the Pilgrims by teaching them how to successfully plant and harvest the land. The additional inscription is "PEOPLE OF THE DAWN."

The gold coins will be priced according to the range in which they appear on the Mint’s “Pricing of Numismatic Gold, Commemorative Gold, Platinum, and Palladium Products” table located here.

The on-sale dates for the Mayflower 400th Anniversary products will be published on the Mint’s Product Schedule here. To sign up for Remind Me alerts, visit:

To reduce the risk of employee exposure to COVID-19 in the workplace, the Mint’s sales centers are closed until further notice. Additionally, due to operational adjustments in response to COVID-19, our customer service representatives are available to assist with any questions you may have, but are unable to accept credit card information or place your order over the phone. Please use our website for all order placements at this time.