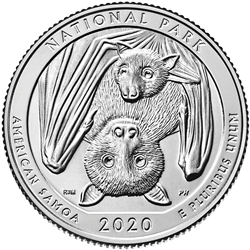 The United States Mint (Mint) today officially launched the America the Beautiful Quarters® Program coin honoring the National Park of American Samoa. This is the first release of 2020, and the 51st coin overall in the program.

The reverse (tails) of the quarter depicts a Samoan fruit bat mother hanging in a tree with her pup, evoking the remarkable care and energy that this species puts into their offspring. The design is intended to promote awareness of the species’ threatened status due to habitat loss and commercial hunting. The National Park of American Samoa is the only park that is home to the Samoan fruit bat. Inscriptions on the coin are “NATIONAL PARK,” “AMERICAN SAMOA,” “2020,” and “E PLURIBUS UNUM.”

During his remarks, Mint Director David J. Ryder spoke about the significance of the new quarter design: “The National Park of American Samoa quarter serves as a symbol of conservation and care. Just as the mother fruit bat nurtures and protects her pup right here in the park, the people and villages of American Samoa work together to safeguard these protected resources.”

The Mint released collectible rolls and bags of National Park of American Samoa quarters on February 3. These products can be purchased online at catalog.usmint.gov/coin-programs/america-the-beautiful-quarters-program/ or by calling 1-800-USA-MINT (872-6468).