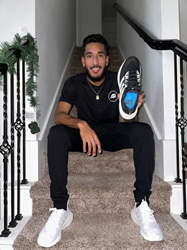 "Jesús is another great example of the hundreds of thousands of athletes happily using CleatPro in cleats and our RunPro insoles in their sneakers,” states Lutz Kleins, CURREX president.

Jesús Ferreira, a member of the successful United States Men’s National Soccer Team who recently competed in the World Cup in Qatar, has signed an official sponsorship agreement with the world’s leading sport insole brand CURREX.

In addition to the U.S. national team, which included the starting lineup during the game against the Netherlands, Ferreira, 21, is also a star forward in Major League Soccer, playing for FC Dallas. In the 2022 MLS season, Ferreira scored a club record 18 goals for FC Dallas and earned a trio of noteworthy honors: MLS Best XI, MLS Young Player of the Year and #1 in MLS's 22 Under 22 list - a ranking of the league's best players under the age of 22. Ferreira made his first appearance for the U.S. national team in January 2020. On June 10, 2022, he scored his first international hat-trick with four goals against Grenada during the 2022–23 CONCACAF Nations League.

Ferreira understands the value of CURREX CleatPro for his games and training, and how dynamic arch technology helps improve his performance. “It doesn’t matter what level of soccer you play, CURREX can help protect your feet and keep you on the field longer," shared Jesús Ferreira. "Even if you don’t have any existing foot issues, their CleatPro insoles will give you maximum arch support and help preserve your health and playing time.”

CURREX CleatPro insoles are designed specifically to work with soccer cleats of all sizes from 2 to 14 in mens (4-16 in womens) and for all levels and ages. Only CURREX CleatPros offer pre-customized dynamic support, Super-Grip anti-slip, are ultralight weight and have a very low profile. CURREX President Lutz Kleins states, “We’re extremely proud of what Jesús has accomplished with our CleatPro insoles at such a young age, and we’re excited to play a part in helping the next generation of players take their game to the next level. Jesús is another great example of the hundreds of thousands of players happily using CleatPro in cleats and our RunPro insoles in their sneakers.”

Available in low, medium and high profiles, CURREX CleatPro’s are available in most local soccer retail stores, online at Soccer.com and at Currex.us.

Based on expertise, experience, and years of research, the range of dynamic performance insoles was developed. CURREX engineered a full lineup of activity-specific insoles in addition to the CleatPro, including the best-selling RunPro, BikePro, SupportSTP, HikePro, WorkPro-ESD, GolfPro, AcePro, EdgePro, and HockeyPro. They deliver more comfort and support, increase performance, and reduce pressure which leads to less body fatigue and can help users avoid many common injuries. That’s why they’ve long been regarded as the best aftermarket insole in Europe and the preferred brand in North America. Starting in 2022, CURREX is the proud to be the official insole for the United Soccer League.